Before you even put your tank models on the playing mat, you should take a little time to study and understand the tank balancing mechanics of the game. I noted that on my first game at the Scarborough Games Society they ignored tank balancing altogether (albeit to allow four people to join in a friendly game, but in tournament competitions, this would not be permitted)...

Balancing is fairly straight forward, it is a points based system where each type of tank is given a points value. For example, my Panzer V Panther has a points value of 32, while my American Sherman 76mm gunned tank has a value of 25... 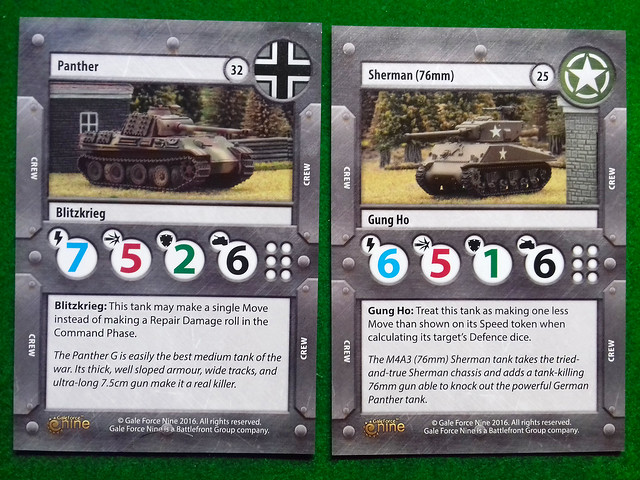 These points values represent various positive attributes of the tank in question, it's perceived effectiveness, attack and defence statics, armament, etc. But also, importantly, it's 'initiative'.

Balancing a game of GF9 Tanks is a matter of trying to ensure that both sides in a game have as equal a number of points in their force as is possible. The total points value would be agreed upon between the players before you start the game. So, for example, a typical beginners game might be set at 50 points - which would allow me a couple of 'cheap' basic Shermans, for example, or a single more expensive tank with some points to spare.

However, what if you can't make your tank forces add up to the same points value of your opponent?

The answer is Upgrade & Character Cards...


Balancing My First Practice Game
The Tanks starter set pretty much dictates that you have a Sherman versus Panther game, this makes things a little easier as it takes some of the pressure off (you will get to chose from a wide variety of esoteric tanks as you get more experienced). So all I need to do is decide on a points level for my game.

Now (in theory) I could simply pitch one Sherman 76mm against one Panther and use some upgrade or crew cards to bring the Sherman up to the Panthers value of 32, but a slightly more historically accurate scenario might be to pit two Sherman 75mm tanks against one Panther. (Historically the Germans often found themselves outnumbered by the 'inferior' Shermans. It's a bit of a cliche but makes for an interesting skirmish.)

As the Shermans each have a value of 20 points (totalling 40 points) and the Panther has a value of 32, I decided to make my practise game a 50 point game so I could play with some upgrades!

Here's how I decided to make up my American team... 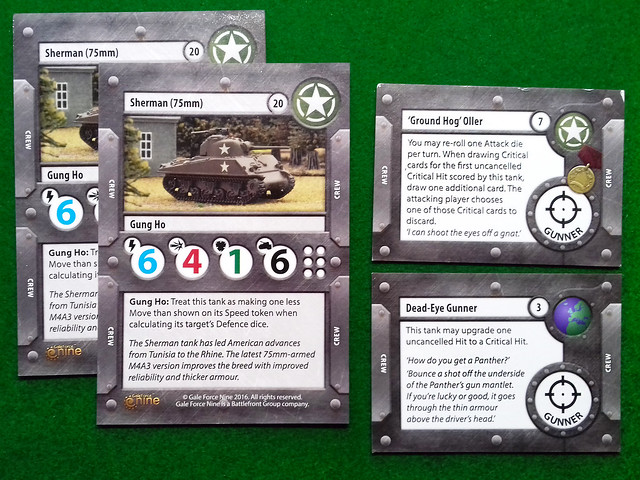 What I have done is added a 'Hero' crewmember upgrade to one of my Shermans (7pts) - 'Ground Hog' Oller and a 'Dead-eye Gunner' (3pts) to my other M4. You can only have one 'hero' crewman in your whole force.

Both these cards give me the ability to positively influence my chances of a critical hit...A much-needed upgrade to my piddling short 75mm gun. This makes my force exactly 50 points in value.

And here's how I decided to configure my German team...
With my Panzer V Panther worth 32 points, this leaves me a whopping 18 points of upgrades that I can make. This means I can really go to town to level the playing fields against two M4s... 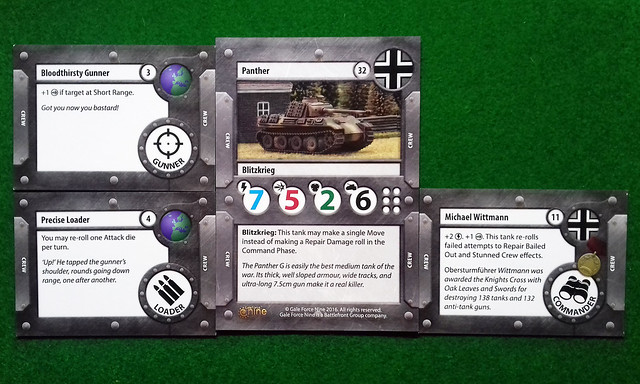 I went big with a hero commander and chose the infamous Michael Whittman (a whopping 11 points). Whittman gives my Panther a chance to rectify a failed attempt to repair Bailed Out and Stunned Crew effects and also adds one extra dice to my Attack. (He also adds +2 Initiative, but the Panther already has the advantage with Initiative anyway.)

Additionally, I added a 'Precise Loader' (4 pts) and a 'Bloodthirsty Gunner' (3 pts) to this tank. These both add the ability to increase the Panther's attack in different situations. 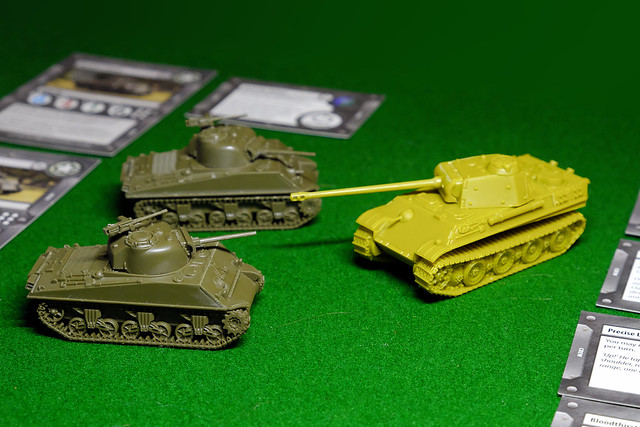 Summing Up
Well, that was easy. But whether - as a newbie to this game - I understand the full potential of my choices (there were quite a few of the upgrade cards that I didn't understand, so I restricted my choices to those I did) is a different matter. As I get more experienced and understand what different upgrades mean - in action - I may very well choose differently.

For example, I do not yet fully appreciate how 'Initiative' can influence combat so I did not take the opportunity to use upgrades to increase the Shermans' Initiative values over the Panther. With experience, I may feel this might be a good thing to do...I don't know (yet).

Anyway, those are my choices, the next thing is to see how these affect the run of play.

Next: Setting up the playing mat
Posted by Beaty at 13:38