I've gotten comfortable with Ground Branch's 'unique' player controls and my play is starting to get a lot smoother and instinctive - though I'll still probably mess around with certain keys.

My next bit of training has been on the rather large Oil Tanker map and I thought it might be quite good to start doing some pre-planning regarding my solo strategy. Obviously, it's nothing complicated as I can't exactly do anything too cunning on my own! :)

Once again, I am using the HK416 with a magnified ACOG scope with a small Holographic sight piggy-backed on top.

This mid-sized AR variant in 5.56mm seem to me to be a nice balance between range and power and compactness. That said, I have opted to extend the length by opting for a suppressor. This weapon should allow me to do some crafty sniping on the large main deck of the ship, while still being reasonably manoeuvrable once I enter the tanker's interior corridors.

The Debrief
My overall thought is that I'm still being a little too careful and need to be a little bit more aggressive. Even before my unexpected and meandering game of hide and seek - with that last, frustratingly evasive, terrorist - this game was going on a bit. There again, it is a big ship with a lot of rooms!

The reason that I am concerned about my pace is that I eventually hope to take part in multiplayer co-op Ground Branch and in that situation I will not be able to dictate the speed of play...I will have to keep up with my teammates. So, my next goal is to speed things up a *a bit*, while at that same time staying methodical and careful.

Note: On the issue of the 'missing' terrorist. I did think at the time that maybe there was something of a glitch at work as my laborious search of the ship was pretty extensive. Sure enough, one of the viewers of my video responded informing me that: "On that last tango, we've had a few instances where the AI get spawned in between rooms (the hollow cavities). You can never see them, but if you move over their position, they can nail you through the walls (invisible for them). Hopefully a glitch that will be resolved in time.﻿" Thank you, PapaReach for that info.

The other thing I will tinker with is my weapon choice. While many special forces are moving away from the legendary MP5 smg to weapons equivalent to the AR M4 carbine platform, I still think the compactness and rate of fire of a pure smg still might be the right tool for close-in engagements. We shall see. That will mean I will have to drop my reliance on mid-range sniping to thin out the enemy, but is that a bad thing? 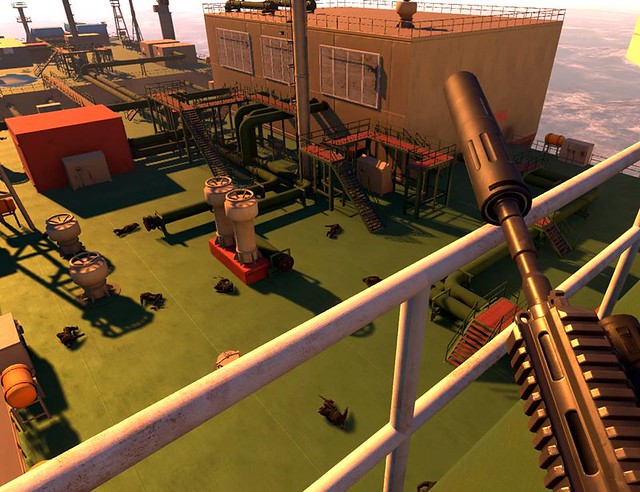 Finally, I think I am ready to dial up the difficult so my next outing will see an increase in enemy to make my mission more challenging and exciting.

Next: Ground Branch's Small Town map.
Posted by Beaty at 11:11