Amusingly this subject was one of my quasi-intermittent rants when I was maintaining my Milgeek blog on a regular basis. I was quite strident about my assertion that what the RAF 'really needed' (at that time, at the height of the Afghan intervention) was a low-cost, low-tech attack aircraft that was germane to the type of targets being encountered in the likes of Hellman (i.e. mud huts)...

Fast forward to 2019 and it seems the penny has finally dropped, although, to be fair the idea of a 'cheap' turboprop bomber did have its champions within the defense community back when I began droning on about it. The United States Air Force is (finally) actually undertaking tests of a couple of the most likely candidates for any future 'light force'. 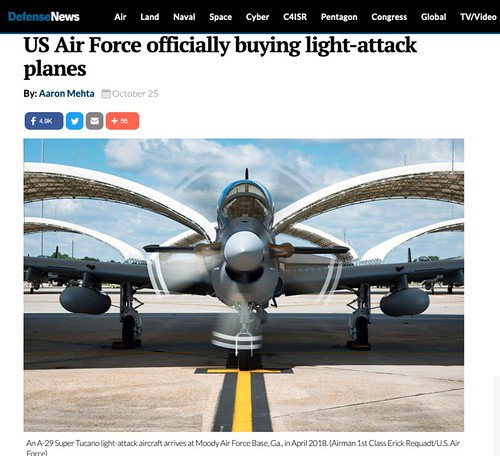 It turns out that there are quite a few aircraft manufacturers who seem to be betting that this possibility - hoping that there might be a nice fat payoff when/if the USAF decides on a full-scale procurement (and that other nations might follow suit). Ker-ching! $$$$$$$$$$$$$$

Hot front runners - and competitors - for any such golden goose are the Textron Aviation AT-6 'Wolverine' and Embraer A-29 (EMB 314) 'Super Tucano'...


Yes, there is definitely a convergence of technical/design solutions here (in fact, there are other similar 'solutions' on the market, like the Calidus B-250 (Bader) and the Pilatus PC-7, et al). BUT, and the point of this post, there are now a plethora of innovative and interesting light attack aircraft designs being touted on the world defense marketplace. 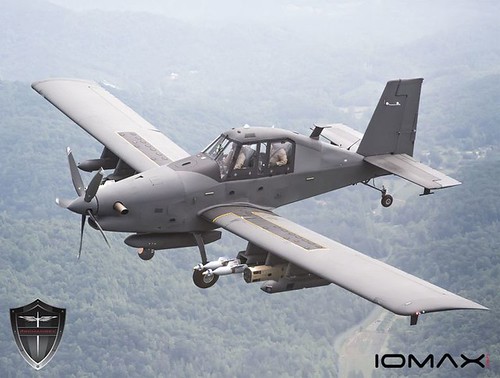 Now, (if you are an aircraft fan) you may get a vague feeling that you sort of recognize this plane's profile but may not be able to put your finger how you know it. Well, if I said you were more likely to spot this little plane flying low over a farmer's field then you might twig...

Yes, the IOMAX Longsword is a militarised version of the Air Tractor AT-802 agricultural aircraft!

How and why some bright spark thought that this flying tractor would make a good light attack aircraft I do not know EXCEPT any good company is always on the lookout for new marketplaces (and Air Tractor must have seen the light attack market blossoming) AND the airplane is inherently designed to fly at low level with great stability. Also, it's rather strange high cockpit layout is designed to enhance 'target' (er, fields) visibility for precision 'bombing' (crop spraying)!

I really like this design, and by all accounts so do the military pilots who have tested it. It is one of the few 'light strike' designs out there that from the get-go is designed to deal with ground objectives, rather than being converted trainers...Even if those objectives are more usually corn or forest fires! :)

So well has the feedback from military evaluation tests gone that IOMAX has tweaked the original design (called the Longsword) and produced an absolutely fantastic looking little strike plane - which, to me looks like the love child of a Stuka and a Sturmovik, which can't be a bad thing - and they have called this aircraft the Archangel... 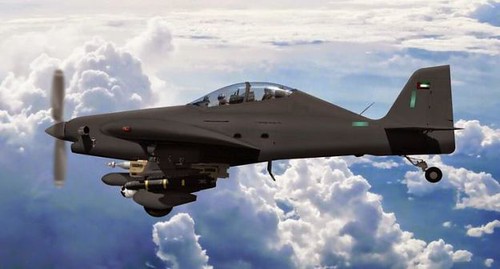 
Just so you don't think I something against jets I've included a cute little contender for the light strike category - the Textron AirLand Scorpion. 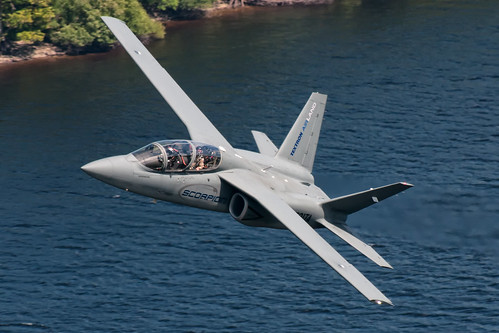 The Scorpion looks very much like a conventional jet trainer - like the Dassault/Dornier Alpha Jet or the BAE Hawk - except for the twin tail and the awkward-looking 'straight' wings. It's like a compilation of different aircraft parts glued together to make a weird new hybrid aircraft.

There is a method to Textron's apparent madness, the straight-wing configuration gives a good low-speed performance which is a distinct advantage in the ground attack mode and negating the disadvantage swept wings have during slow-flight phases. SO, Textron's mantra is that the Scorpion has all the advantages of a 'fast jet' with the tactical advantages of a turboprop, as they put it in their literature...

'Scorpion is jet fast – with the ability to get to an escalating situation quickly – yet can maneuver at much lower speeds, if the mission requires it.' 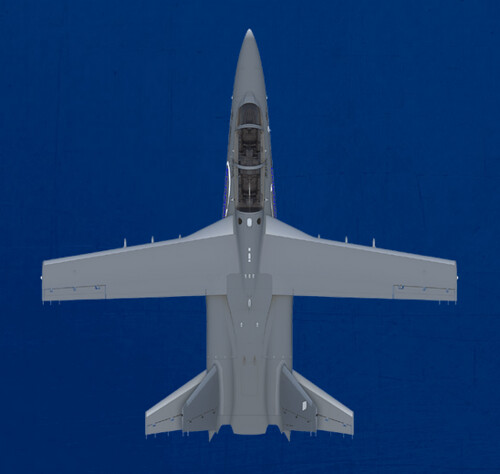 So, you might ask (and I did wonder) if the Scorpion is the ideal happy medium why is it not in the running for the USAF's current search for a light strike aircraft? Good question, but there isn't one single good answer. Foremost is (probably) that the Scorpion isn't currently in use by any air force, while some of the other existing turboprops are already established in inventory as training aircraft (this reason kinda explains why the USAF's evaluation has been leaning to the likes of the Super Tucano, which has excellent 'in-service' pedigree with a host of air forces).

In short - and another reason the Textron may not be in the running - is the defense communities inherent conservatism when it comes to adopting new equipment. The Scorpion is untested in combat or service and looks a little unconventional - and this is why some of the other 'goofy' planes I am including in my list may, likewise, never be adopted by a major power. (Smaller nations are more likely to gamble on an untested technology - especially if the price is right.) 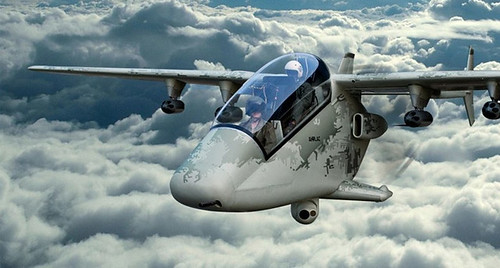 Now, as weird and sci-fi looking this one is, I kinda like it. Before you go thinking this is just too 'James Bond' it's worth pointing out that it's actually a bit more 'mini Bronco' than 'Little Nellie' (the tiny autogyro from 'You Only Live Twice'). The North American Rockwell OV-10 Bronco, I mention was a very successful forward observation/light attack developed for the USAF during the Vietnam War which was so good that it was recently brought out of retirement in order to support US Special Forces deployed in Syria! 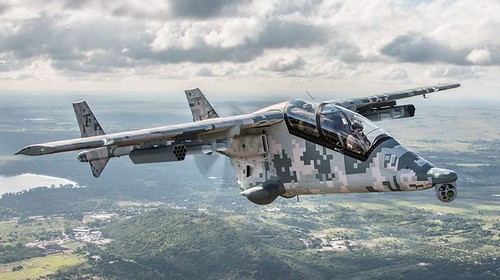 In fact, I have seen the AHRLAC (which stands for Advanced High-Performance Reconnaissance Light Aircraft) referred to as the 'Bronco II'. This was a rather cagey marketing move by Paramount Group who set up 'Bronco Combat Systems' in the US to give the South African parent company a bit of a foot in the door - so to speak - when competing for US defense contracts. Clever!

Anyway, this 'pusher' format prop aircraft gives the crew the unrestricted forward observation view of a light jet with the reliability and economy of a turboprop. At the same time, it has a very sophisticated array of reconnaissance and targeting electronics and a decent bevy of hardpoints for weaponry. 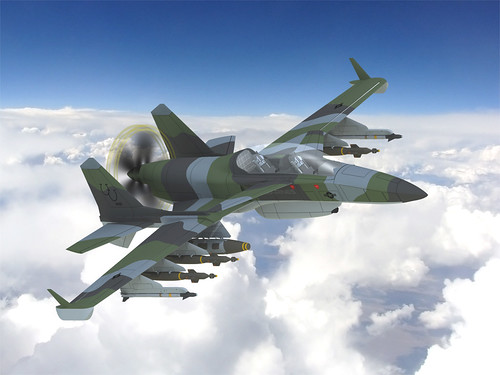 Another 'sci-fi' looking entry for a future light strike aircraft, the SM-27 is - admittedly - more of a technology concept (no prototypes as yet) but it is interesting enough for me to include in my list for two reasons; first of all, it's cool and secondly, this design has seriously been put forward as a replacement for the USAF's A-10 Warthog! (The A-10 is constantly rumored to be facing retirement.)

Despite being just a 'paper plane' that hasn't got beyond the drawing board, the SM-27 (and it's jet-engined variant, the SM-28) the 'Machete' does have the advantage of being a purpose-designed warplane. 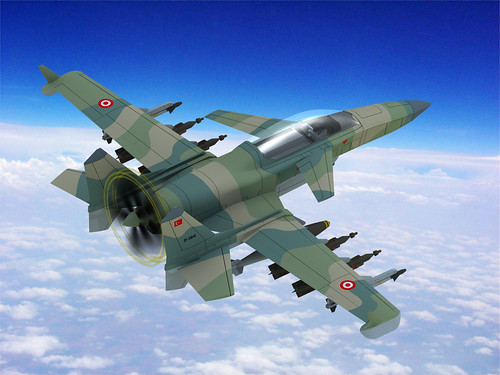 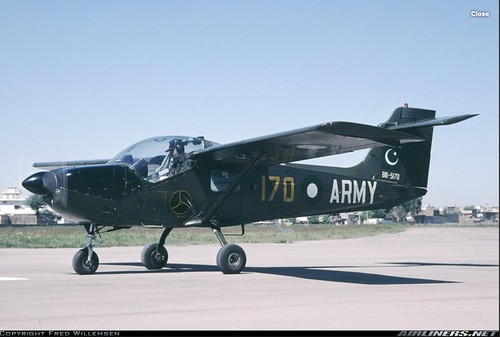 I felt I had to include this example of a 'light attack aircraft' because it does beg the question - Just how unsophisticated a plane do you need for it to qualify as a light military bomber?

Pakistan has - perhaps - established a baseline below which it seems impractical to stray. As you might guess, the Mushack is little more than a souped-up sporting/leisure aircraft, and it's actually derived from SAAB's MFI-15 'Safari' leisure plane of the 1960s!

However, simply hanging a couple of dumb bombs off the wings of a 'sporter' is not what Pakistan has done here. The Super Mushak has a more powerful engine and integrated avionic and electronic systems that make it capable of dropping precision laser-guided munitions, so it is technically up to the job.


Incidentally, the name Mushshak means “The Proficient” - which kinda sounds like 'it's OK, it'll do'! 😂

So, there you have it. A bit of a round-up of what's out there as candidates for the 'new' light strike aircraft category (though, of course, the 'fighter bomber' type had already established this format).

My favorite? Well, I have a soft spot for the IOMAX Archangel - what it lacks in 'space age' design features it makes up in ruggedness and I think that's a good asset to have when flying low and slow over enemy territory!

One last thing: Although there is some lingering suspicion about the possible vulnerability of such aircraft you must remember that such aircraft are intended only be deployed where a military has already established 'air superiority' OR in asymmetrical COIN (counter-insurgency) missions.
Posted by Beaty at 06:29