My daughter Stacey and I have started up a 'Dad & Daughter Game Night', meeting up online for some family fun amidst the current lock-down 'social distancing'. Our first choice for a co-operative title is another 'oldie' - Left 4 Dead 2 (2009). 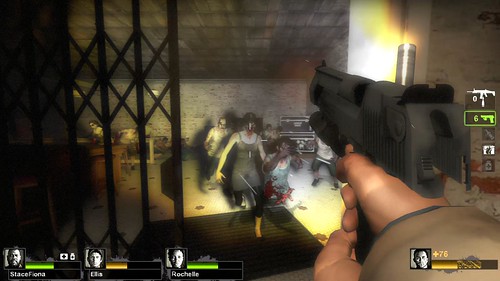 Again, this venerable title defies it age with some great game-play and yet, because of it's less demanding graphics it makes for a wonderfully smooth internet multiplayer shooter*. Though, both Stacey and I remarked how surprisingly fresh the graphics were for a ten year old title. Some old games are jarring in their graphical obsolescence, but not L4D2 (in our opinion).

* Edit: I should add that - with everyone being at home during the lock-down and binge-watching everything on Netflix - 'contention' (the density of internet usage in your immediate area) is a real issue at the moment. My internet speed has dropped drastically and so these older, less graphically demanding, games are seeing something of a revival.

Anyway...Sunday nights seem to have become our principal 'game night' and we've been working our way through the game's episodic missions. Last night we took on chapter 2 - The Passing. 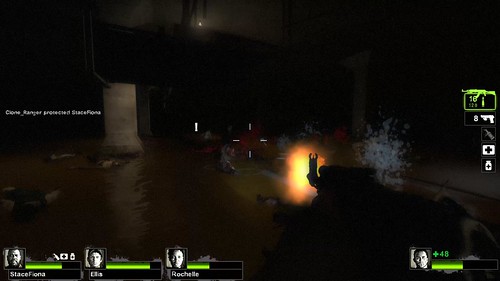 Above: Sorry you can't see much - but this dark and dark level was completely brilliant! At times it was just the sound that gave away the presence of zombies.

This was a beautifully dark and semi-subterranean campaign which ends in a paper-chase finales where you have to collect 16 fuel cans to start a generator which powers your means of escape from the chapter! I particularly enjoyed this conclusion to the campaign, it involves some pretty frantic running about and forces you to play as a team, otherwise you have no chance of completion. Though... Playing as we did with two AI teammates put an additional burden on Stacey and I and at times our robotic comrades seemed like they were our own worst enemies!!! 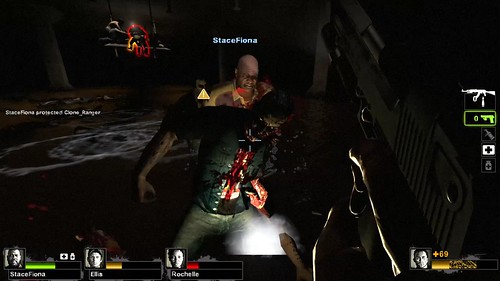 Above: An unfortunate zombie get's caught in a Team Beaty sandwich - with extra jam! Watching each other's back is intrinsic to success in this game.

Still, in the end, we (just) managed to complete the mission (by the skin of our teeth) on the third attempt and it was hugely satisfying. Along the way we had freights and a lot of laughs - I managed to set Stacey on fire once and she took far too much pleasure in some 'accidental' friendly fire incidents. 😆

Here's a very short clip of the moments when we completed the mission quest and made good our escape...

...For one horrible moment I thought Stacey was gonna drive off without me! 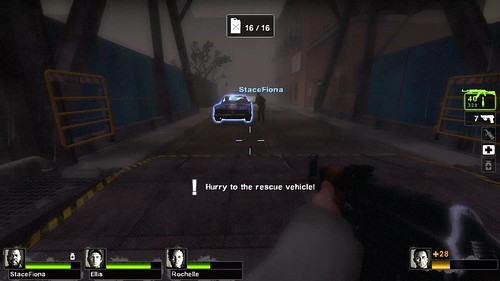