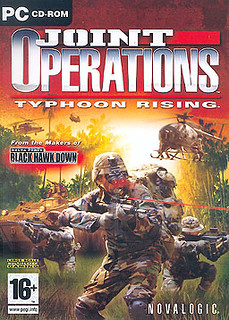 A wee bit of gaming nostalgia this morning as I came across a bit of footage on YouTube that show some Joint Operations play from seven years ago (or more).

I've been looking for a video of JO for ages but it's been a bit harder to find than, say, Battlefield 2. Maybe it's because the whole posting of game footage wasn't so easy or such a big thing back in 2003, but there isn't much about.

You might ask what the big deal was or you may have never heard of Joint Ops. Well, it's actually quite an important game as it was the one of the first big online multiplayer 'battlefield' games that gave you the chance to experience joint warfare  (land, air and sea) all together in one first person team shooter.

In many ways, it was the template for Battlefield 2. But it's still amazing to think that while BF2 is the big name everyone remembers and waxes lyrically about, Joint Operation was hosting huge 150 player server matches which put BF2's 64 player games to shame.

JO was my introduction to squad based online battlefield play alongside The University of Hull's BIG clan boys. Until then I had been playing Ghost Recon online, but with the addition of vehicles, ginormous maps and 150 player battles Joint Ops really blew my mind. The graphics look a little hockey now, but that doesn't matter, I remember this game very fondly...

Sadly, after the release of the follow up - Joint Operations: Typhoon Rising (which added motorcycles!!!) word started circulating about a new Battlefield game that EA/DICE was working on and, ominously, it seemed to have some of JO's issues resolved (like the horrendous spawning mechanics). Once BF2 released a large portion of JO's player base - including BIG clan and me - jumped ship and Novalogic - inexplicably - never fought back with an improved JO.

I - and many others - could never understand just why Novalogic didn't make a Joint Ops 2. There were issues that they could have solved relatively easily that would have made it a BF killer. But it was never to be and it remains one of FPS gaming's biggest mysteries and missed opportunities.

Ask anyone who played Joint Operations back in the day and they will tell you what an amazing game it was.
Posted by Beaty at 01:16