In my previous post about the range of possible companion or back-up AEGs that I considered for my modern German army loadout I left you with sort of cliff hanger. At that point I really did not know which AEG I would buy to go with my long JG G3A3. Well, I made my decision!

The D|BOY G36c EBB was not my first choice for a G36 based AEG, originally I was looking at the SRC G36c but - as happens with AEGS in the UK - there was a sudden drought of the SRC model and I had to look elsewhere. I looked at several similar models and the D|BOY version seemed to offer everything I needed at a very good price.

Opening the box
Don't expect fancy packaging, the D|B G36c comes in a styrofoam case inside a brown cardboard box. There's A sheet of photocopied 'instructions' and a cheap charger (now in the recycle box) and the G36c itself and that's it!

Now, as I have been out of airsofting for some years now my UKARA has lapsed, therefore I had to buy a two-tone AEG. That's the way it is. But I have a 'cunning plan' (more of that another time).

The good, the bad and the ugly
Actually, let's start with the bad. Overall there aren't many major squeaks or rattles or breakages, it all feels quite solid…But…

When I attached a front vertical grip I noticed bit of wobble. As it turned out it wasn't the rail but the whole fore-stock itself that was a little shaky. The fore-grip is designed to be easily removed so you can insert the AEG battery, however it is only held in place by one metal pin!

Which brings me to my next niggle. The retaining pin is very easy to remove, which may be good for accessing the battery compartment but worrying when you think about how much the AEG will be thrown about in the field. What's more is that there are a few of these pins on the AEG, so there is potential for these pins becoming loose and falling out.

Next there is the stock. The G36 folding stock isn't the most attractive design in the world, it's not that much better than the old AK74 skeleton stocks. That said at least the the AK74 stock locked into the folded position by means of a spring loaded metal hook, the G36 stock relies on the playable qualities of plastic alone!


When you fold the G36 stock over you press it into a moulded plastic 'hook', and using pressure and the pliability of the plastic of the stock's frame the stock snaps over the catch. Can anyone say 'wear and tear'?

The final criticism I have relates to what is perhaps one of the most important feature on a AEG (or real gun for that matter), the safety. Or, more correctly, it's the fire selector switch that bugs the bejesus out of me.


Now, on the good side the selector switch is ambidextrous AND in my favoured position just under where the thumb rests when you grip the pistol grip. But it's the quality of the switch that bothers me…It's really sloppy.

The selector does not positively click into place as you change down from 'safe' to 'semi-auto' to 'full auto'. It just vaguely slips down from one position to the other with no real feedback to tell you what mode you are in. I dislike this switch SO much!

Finally, I should mention the quality of the many rails that are included on the AEG... 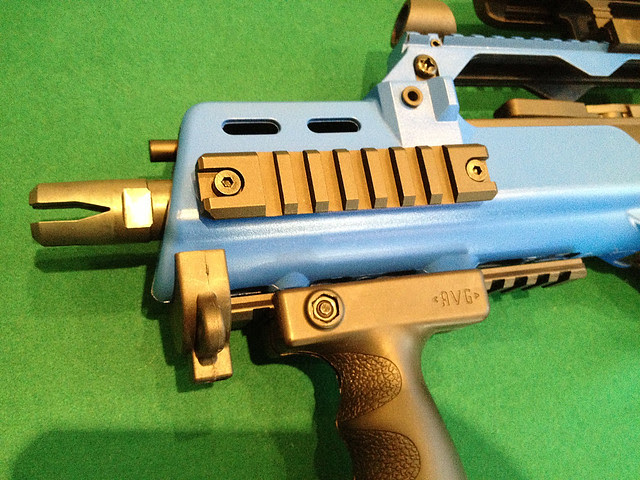 The good
The G36 is a cool looking gun. OK, you may disagree but Hollywood loves it! And the G36c - which is known as the 'commando' or 'compact' - must be the coolest of the the G36 family...


In reality - and experts agree - the G36c is really a sub-machine gun, in format if not in calibre (…I will not start my usual rant about the failings of 5.56x45mm calibre…I won't…I won't…) and because of this it handles like a dream.

In fact, I was surprised just how short this 'shorty' is. It's smaller in length than my AKS74U, and that's short! So it goes without saying that if CQB is your 'thang' then the G36c is right up your - narrow - alley. (You should note that the stock on the G36c is actually marginally shorter than the skeleton stocks on the rest of the G36 family. I believe this to facilitate the use of thick body armour.)


The D|B G36c is also, with the caveats mentioned above, quite nicely made. I mean - obviously - you do get what you pay for, it's not a VFC or a Tokyo Marui for that matter, it's a cheap and cheerful Chinese clone. So I am willing to overlook some of it's minor quirks - except the selector switch that is.

However, the saving grace is the handling. The gun comes up to aiming superbly well and while, of course, that is due to H&K's design genius and not D|B's, none the less it's handy little bugger!

The format of the G36c is surprisingly addictive. I know my G3A3 is the better AEG, and I know the G36c is at a disadvantage in woodland but the D|B G36c makes it hard for you NOT to want to pick it for any skirmish. It's just such a fun little AEG.

Part of this enjoyment has to do with the ergonomics and the light weight of the AEG.

The G36 is - famously - 'a plastic gun', and so is replicated nicely in high impact nylon in AEG form. There's no arguments about 'real steel' here - the real thing is plastic! This makes it a pleasure to tote about all day.

You can even pick the G36c up like a pistol, if you wanted to... 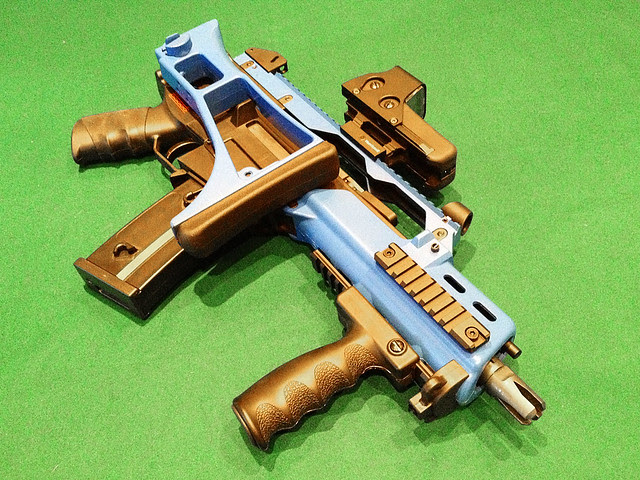 Top of the list of positives though must be the abundance of rails. And the best thing is that you don't have to add them by means of add-ons, the G36c was designed with the rails as standard. There's a place for all the accessories that you can think of (IF your accessories fit that is).

The Ugly
However tempted I might be to say the ugly is the two-tone paint job I won't! The ugly probably has to be the 'Marmite' nature of the G36 design itself - you really do either love it or hate it.

I'm with Hollywood on this one, I think it's sorta sexy. But how practical is it?

Well, I got it as a backup AEG and it certainly ticks all my boxes - it's compact so will slip into a single bag along side my main AEG, it's light and it was cheap! On the other hand, I'm not going to win any long range encounters, and the small battery is a little bit of a nuisance.


From a personal point of view I suppose I could criticise the design of the magazine release button, but that would be a little unfair as that is a feature of the real gun and not a fault of D|BOY's replica (which is why I haven't mentioned it as a 'bad' feature).

The mag catch is an AK style paddle release and as such is not a gravity drop mag release, it instead requires you to physically remove the mag before inserting a fresh mag. This demands a two stage removal operation whereas, for example, the M4 allows the user to 'drop' the mag by gravity - having activated the release button with the trigger finger - while the new mag is being ready for insertion with you 'off' hand. It's a technicality and something of a non-issue in the world of airsoft as the milli-seconds lost would only matter in the life and death world of real firearms.

This brings us nicely to the issue of magazines themselves. Going for the G36c does mean I will now have to pack a completely different set of magazines when I go skirmishing - that's a pain!


The real G36 takes a 5.56x45mm NATO round, BUT in a completely bizarre move the German army decided that they would not choose the M4 format mag - which is practically a NATO standard - for their new infantry rifle. The Germans instead decided to go with a completely new magazine design based on, as mentioned, the AK style of mag release. 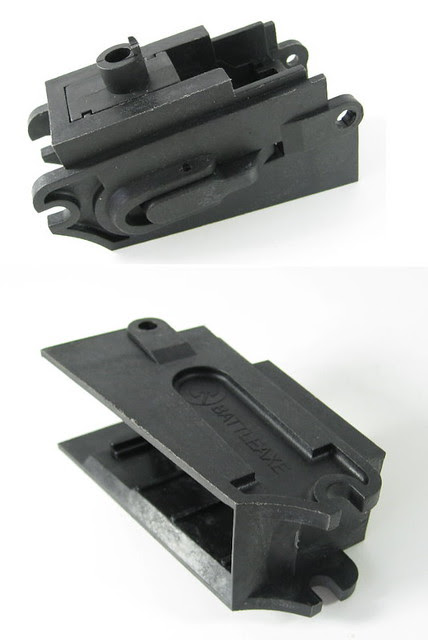 Airsofters may balk at this. Your team mates may have M4s or variations, therefore you cannot now share magazines during a fire fight. But fear not, as the G36 family of AEGs are very popular and there are a host of reasonably priced mags out there - some may just find this a little annoying.

There is an accessory made by Battleaxe that replaces the whole G36 mag well with a version that accepts M4 style mags. This may solve the issue if you really do want to use M4 mags.

Left: The Battleaxe G36-to-M4 mag converter. Apparently it will fit in JG/CA/Marui G36 airsoft replicas. You pull the mag-well receiver pin out of your G36 and simply swap it over with the Battleaxe unit. It takes about 4 seconds.

Conclusion
Well, that's about all I can say about my initial impressions of the D|BOY G36c EBB AEG. Generally I am satisfied with the replica considering that I did not want to spend a lot of money on what would be just a back-up airsoft gun. There are niggles - oh that selector switch - but I can't really complain that much for just £120.

On the subject of value for money, it is worth mentioning that the D|BOY G36c is a clone of the UMAREX (Ares) G36c, which cost £299. This is worth mentioning because the D|BOY version shares the UMAREX's easy-change main spring feature. In short, access to the spring is via a hatch behind the stock - you pull out the spring and pop in a new one. Handy as I am told the AEG runs slightly hot at 370fps.


The two-tone pain job IS a real annoyance, but that's my fault and it's a fixable issue. Just note that the legal position is that if you repaint the two-tone effect without UKARA registration you are, in effect, turning the AEG back into a RIF (Realistic Imitation Firearm) and as such are contravening the guidelines.


I suppose the real test of whether an AEG is good or bad is whether it puts a smile on your face when you pick it up - well, the D|BOY G36c certainly seems to pass that test! But let's wait until I do the firing test before we give a resounding thumbs up, but I am optimistic.