World of Tanks - My Top 5 Tanks

Well, after so long playing this game it's about time I did a post on my favourite tanks. Two things will be surprising about this list; first of all four out of five of these tanks are tier VI or below, and secondly tow of these tanks are from my non-Premium 'free' account (which goes to show you can have fun without spending money on WoT)! 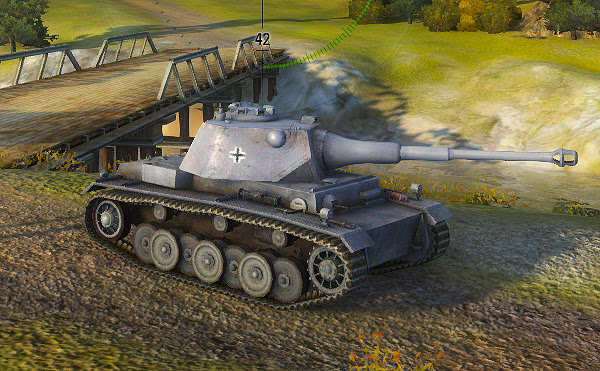 I have been running this tank on my ‘free’ WoT account so it is one that’s achievable without necessarily spending any money on.

The VK is a transitional tank which marks the last medium format before you must choose between the specialist and more advance medium or heavy line of German tanks. After this tank you must choose either the advanced medium Panther or the heavy Tiger.

As a tier VI with a tier VII gun you either tend to find that you can dominate a game or are at the bottom of the pile. In tier VI- games you punch your way through the opposition and also make for a very good long-range sniper, but in a tier VII+ game you must learn to adjust to become a support tank. 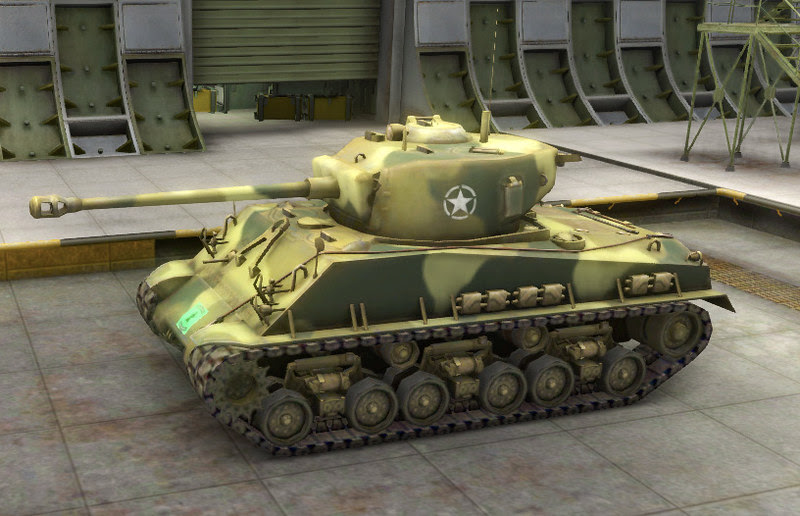 This is the closest you will get to the famous British Sherman Firefly and its amazing 17 Pounder gun. The M1A2 76mm long barreled gun of the Easy Eight means you have a terrific rate of fire – 18.18 rpm - and often surprise the opposition who try and pop up for a shot while they think you are reloading!

The mobility of the Easy Eight means you can ‘hit and run’, but you can also do some very useful harassing long range snipping. With larger opposition you have to pick your shots, but keeping your enemy tracked while bigger friendly finish them off is very satisfying.

I’d still like to see a British Firefly version of this in the game, but I can already hear the complaints that that would be too overpowered! 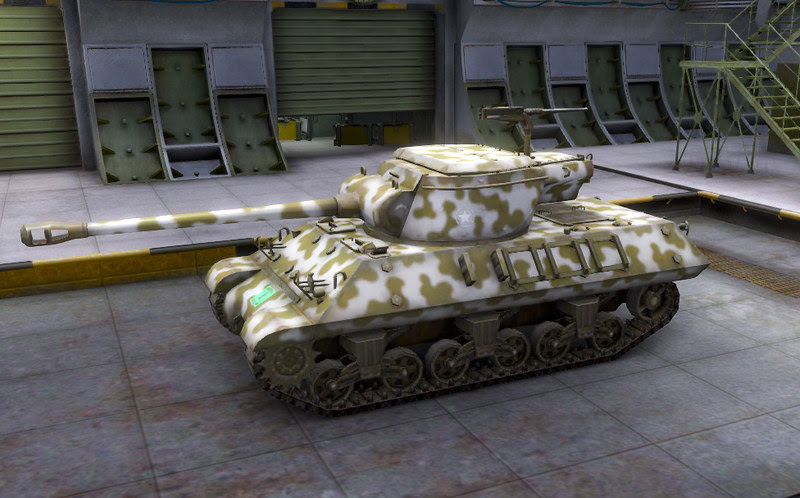 I love this tank destroyer! So often the main failing of a TD is having no turret so if the position get behind you you are a dead duck, but the M36 Jackson has a fully rotating turret (albeit a slowly turning one).

The upgraded M3 90mm AT gun out-hits the equivalent German 88mm (just) and you feel you can do some usefull damage even when you are in a higher tier game, with some careful aiming!

It and its tier VI companion the Hellcat both punch well above their weight with a superb gun for their class. The difference between the Jackson and the Hellcat – both similar designs – is that the Hellcast is stripped down for speed while the Jackson is the bulkier of the two with extra armour. Take your ick based on your style of play – they are both a lot of fun to play. 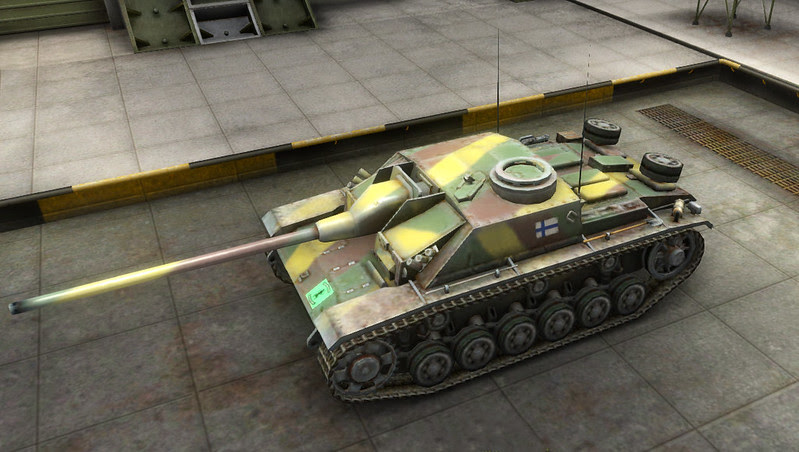 This is the second of my ‘free’ account tanks and is a little beauty. Despite my aversion to German tanks I justify my regular play of this tank (which I have now also added to my Premium account) by the fact it was used by the Finnish army during WW2. OK they were still allies of the Germans – until the later part of the war – but it’s easy to admire Finland’s staunch independent stance and their plucky resolve in the face of a much large adversary – The Sovet Union.

Anyway, this tier V tank destroyer has a superb high velocity gun – tier VI 7,5 cm StuK 42 l/70 - which just like the real life tank means it holds it’s own even against some larger and more modern opponents. The good rate of fire means you can chip away at the big guys and it has fair mobility so you can, if you choose, get out of a situation as fast as you got into it!

I tend to prefer to take on the bigger tanks in this, aside from being very satisfying it does rack in extra rewards and I find that the StuG III is a reasonable earner for a non-premium tank.

They say big is beautiful and until recently you didn’t get much bigger than the massive BL-10 152mm main gun of the Object 704!

The 704 has now been superseded by the Object 268 and downgraded to a tier 9, but I earned my 704 when it was still a tier X tank destroyer and was the scourge of the battlefield. There are not many tanks that can cause a JagdTiger to back down, but the 704 was one of the few. I have seen Mice and JTs back peddle furiously when they realized that there was a 704 over the rise!

The gun is simply outstanding. The enormous ‘KA-BOOM’ is very satisfying and the effects of a hit are usually always side-splitting as you regularly blow away great chunks of an unfortunate enemy’s hit points in one shot.

A typical piece of hilarity – for example – was a one shot kill on an IS-3 at distance (and while moving) which dispatched all of his 1500 hit points in one go (ammo racked him)!

Another amusing tale worth retelling was the time I shot at a tank at extreme distance. I missed, but to my amazement I hit – and destroyed! – a tank that was behind him and out of my viewing distance!

Of course, as a big non-turreted TD you are at a bit of a loss if a tidgy light or medium gets behind you and have to sit embarrassingly waiting the inevitable end. Likewise artillery is your nemesis, with your roof armour being paper-thin. But in all other encounters you have the satisfying knowledge that 9 times out of 10 your enemy is more scared of you that you are of him!

My final word is this, despite having earned the Object 268 upgrade to the 704 I often prefer to play my tier IX TD instead.

While still not much goes on except the usual World of Tanking I am keeping myself busy with my overhaul of my attic man cave and also by doing a fair amount of reading. Strange to think that in times gone by this time of year would have been sunny airsofting weather...But instead we continue to see dismal rain.

Ah well, at least I have two very exciting books on the go at the moment - one and audio book and one a traditional hardback. The first is the story of the birth of the Commandos during World War 2 and the second the story of the American 417th Night Fighter squadron which flew British Beaufighter aircraft.

Both are stirring recounts of the action of the members of these very different - but none the less very specialised - units. The focus of the retelling singling out individual members of the units and their exploits based on memoirs. 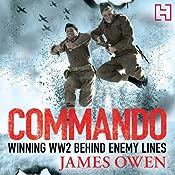 Commando by James Owen
While today we associate the term Commando with the Royal Marines the origins of the WW2 Commandos were to be found in the army, only later was the role transferred to the Marines.

This is the tale of mishap and misadventure in the tradition of British amateurish trial and error - as the early history of this famous formation was characterised by ludicrous failures. Hindsight is a wonderful thing and the modern reader will no doubt - as I did - smuggly shake their head at the head smacking naivety of some of the first operations.

Were some of the outcomes of these inept mission not so tragic the almost slapstick quality of their execution would make the whole thing comical. Sadly some very fine men lost their lives for very little accomplishments and the whole idea of Commandos, initially, hung in the balance. 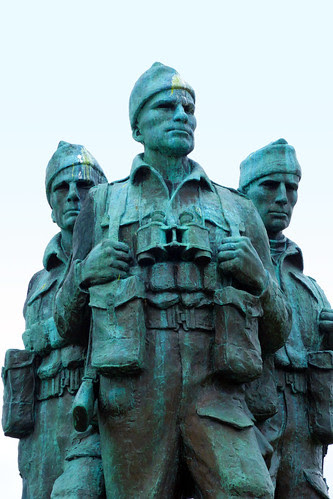 Strangly enough, while NOW we can see the merit of Special Forces I did end up with a lot of sympathy with the British military establishment and their suspicion of independent forces like the Commandos. Units like the Commandos syphoned off the creme de la creme of the army's middle ranking officers and men and bearing in mind the initial wastefulness of badly planned operations there is a real argument that these talented men would have been better utilised in the infantry.

But in the end the amateurish organisation of the Commandos was replaced by a far more professional leadership and the force started to undertake the famous - though still costly - operations that they are famed for.

James Owen's book is full of colour and atmosphere, not least because of the characters that were involved. There are 'cameo' appearances by famous names like Lord Lovat, Randolph Churchill, David Sterling and even David Niven! Though be prepared to cringe your way though the early 'schoolboy errors' in operations, they really are toe curlingly awful (though to be fair nobody had done this sort of thing before).

I will relate my thoughts on the second of this month's reads tomorrow...
Posted by Beaty at 02:31 No comments: