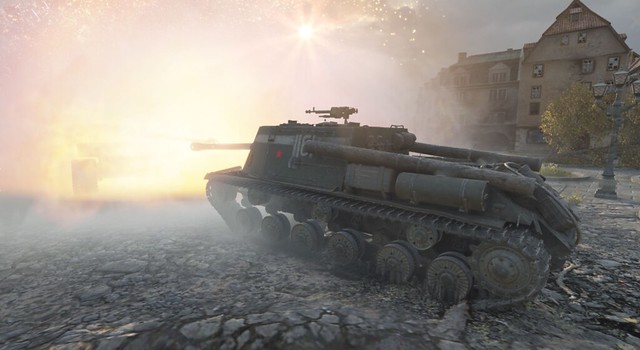 World of Tanks has - like it or not - become an entrenched 'go to' game for the BIG clan. Quite simply, as we have observed many times, it's a game you can still play (to some degree) while drinking alcohol!

To be honest, BIG Clan will never be a serious WoT competition team, we like our food, drink and arsing about too much to take the game all that seriously. We just like the fact that we can get together online and shoot stuff without having to think too much about it.

So, here I am still playing this darn game... 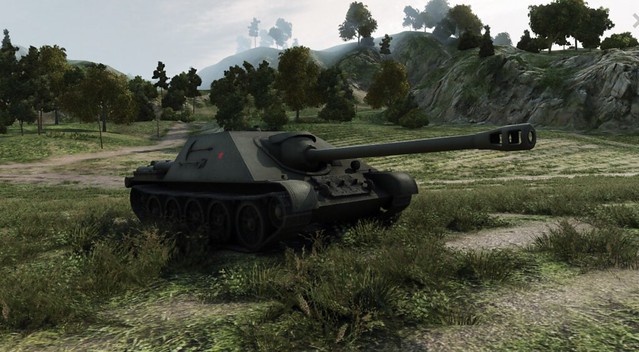 The one thing that keeps me interested in this game is my obsession with WW2 Soviet Tank Destroyers. I just love them, they suit my play style and I love it when I one-shot or ammo-rack an opponent and see his hit-points dwindle to nothing in the blink of an eye. I'm evil like that!

For the Festive season, Wargaming.net has dropped the price of several of the tanks or announced a virtual 'advent calendar' of special offers on certain tank types. So I have picked up a couple of premium TDs at bargain prices (I like to tell myself)...

The SU 122 44 versus the ISU 122S
I bought two Tier VII Soviet tank destroyers, which might seem over the top but these two TDs play in very different ways. The SU 122 44 is a bit of a derp gun on a T54 chassis, so its fast(ish) and allows you to hit and run. While the ISU 122S has good armour and a gun with a high rate of fire so you can hedge-camp and pick off oncoming enemy with a flurry of hot lead!

I've had my eye on the SU 122 44 for some time as I fancied trying out a bit more of a mobile way of playing tank destroyers. My teammates have the German E25 - which is a very nippy little TD - and I like the look of the way they scooted about the battlefield, snapping off a couple of shots here and there and harassing the enemy. The SU isn't as fast as the E25, but it's faster then my usual lumps of iron. 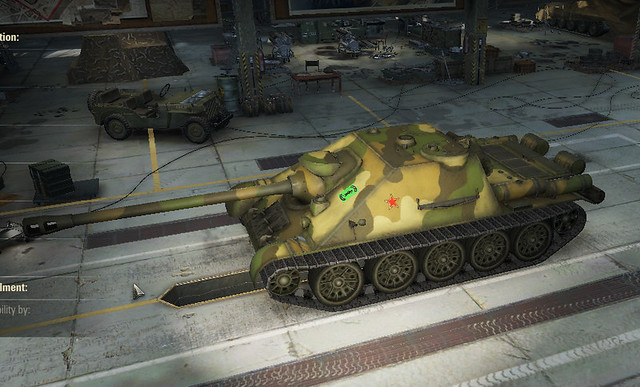 The downside - there always is one - is that the SU's armour is a wee bit on the tinfoil side. It's not so bad on the front and I have regularly bounced incoming shots, but if your enemy catch you side-on your a wee bit screwed! Short story, use the mobility and don't let them catch you!

The ISU, on the other hand, is more of your traditional long-range sniper. It has comparatively good armour, but loses mobility as a consequence. The highlight of this beast it the high rate of fire from its gun, which spits out 122mm shells every 7.10 seconds...Nice. 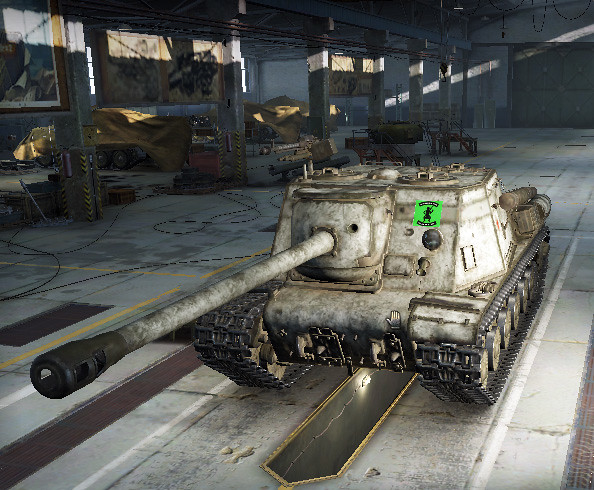 This is great, particularly in the situation where you track a vehicle - literally stopping it dead in its tracks - because you can reload quick enough to take full advantage of the stationary enemy. And even if he repairs quickly, you'll still have impeded his progress to cover and so will still get in a cheeky follow-up shot (or two if you are lucky)...

Which is best?
It's fun to compare two totally different styles of tank destroyer, you really have to play these tanks in very different ways. Trying to play the SU 122 44 like a traditional TD will almost certainly end in tears, as it neither has the long-range accuracy or survivability to simply sit in one place and slog it out.

But, hit and run tactics don't really suit my temperament and the random nature of the accuracy of the SU's gun is hugely frustrating at times. Annoyingly, I have managed the occasional lucky long-range snapshot (much to my surprise), but then - bizarrely - I have completely missed (or had shots bounce) on point-blank targets!

The ISU is much more my type of tank destroyer, with the added bonus of the nice rate of fire. And if I had to choose between the two I'd have to go with the ISU 122S. 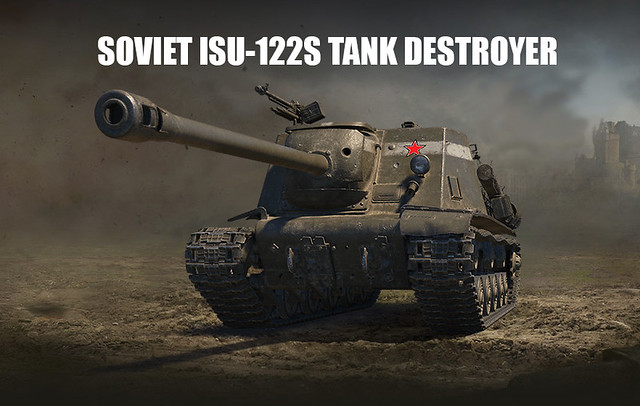 Added bonus of Premium Tanks
The added advantage of buying Premium tanks for your garage is that they come with a special XP/crew training bonus. A Premium tank will add an extra 50% more crew experience per battle and it allows you to Accelerate crew training. Additionally, you can transfer crew between vehicles of the same type and nation without penalty or retraining.

This is all excellent stuff if you want to fast-track your crew training. So, for example, I now have three Premium Soviet Tank Destroyers and what I do each game session is that I transfer my Object 704's crew into each of these TDs for the first x2 (or whatever it is) game. By doing this, the 704 crew get the benefit of all that extra crew experience and accelerated training four times!

The Elite status of your Premium tank also earns you additional credits per battle and allows you to convert Combat Experience earned to Free Experience. This is a nice little credit earner, which can help fund improvements or your supply of Gold ammo (which can be bought with Silver credits).

This last part is something that players - particularly those that suffer at the hands of your 'Gold ammo' - completely overlook (probably deliberately). As these people still insist on calling you a 'Gold noob' as if you have paid to win, when all you have really done is bought Gold ammo with Silver credits that you have earned by killing tanks. It's the gift that keeps on giving! (I never pay real money (Gold credits) for Gold ammo...It's all 'bought' with Silver.)

....Postscript: The SU-122-44 can't snipe...
While not the best game I've ever played, it does illustrate that the SU can pull off a traditional TD play style if it has too. In this game, I managed to fire off a few nice long range shots (and actually hit a few things)...

Sniper Elite 4 off to a bad start

I was very surprised when I found that I thoroughly enjoyed playing Sniper Elite 3 on the PC. Being a First Person Shooter fan I had always perceived Third Person games as something of an inferior graphical compromise for console players. But, despite my scepticism, I found this format a completely delightful and perfectly suited to the sneaky stealth theme of the game.

Anyway, I was looking forward to the next irritation of the franchise so when the first 'teaser' trailer was released I eagerly settled down to watch it....

However, what would a game teaser be without some sort of controversy? Bearly 25 seconds into the trailer I had to hit the pause button as I couldn't believe my eyes... 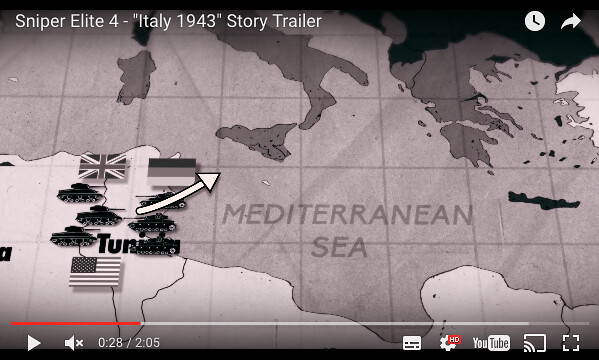 In case you can't spot the glaring error, here's a not so subtle clue - look at the German flag. Yes, some pathetic PC marketing numb skull has substituted the Nazi flag for a modern German flag!

Now, there are good reasons not to display the Nazi flag, the principal reason being why should we perpetuate its mystique. But, more practically, also the use of the Nazi flag is actually forbidden in some countries, so it's quite normal to replace its use with an alternative symbol (scale modellers will be very familiar with this issue).

However, what Rebellion Games have opted to do in this case - instead of replacing the swastika with an 'iron cross', which is the usual tactic - is to replace the hated Nazi flag with one that is clearly (despite being in monochrome) the modern German flag, or Bundes tricolour.

To me, this is not only historically incorrect but deeply offensive to modern Germans who have worked so hard - for several generations now - to separate their national identity from that of the Nazi ideology. The use of the modern German flag is not only deeply insulting but shows a breathtaking level of ignorance and sensitivity on the game developers part.

This has really spoilt my enthusiasm for the game, and I really hope Rebellion make some sort apology as it's the least they could do. While America and Europe seems intent on moving back to far-right politics there are people - like my father's generation and mine - who still abhor the Nazis and think that there is no justification whatsoever to glorify them or otherwise excuse ideas that are blatantly Neo-Nazi in sentiment.

As far as I am concerned Germany is forgiven for its past, and while we mustn't forget we must also recognise how humiliating it is for the German people to be so closely equated to their wartime regime, as if the two were completely indistinct.
Posted by Beaty at 00:23 No comments: