I'm starting to get to grips with 7 Days to Die, to the point where I am considering starting a new game, with a new map seed and with the game difficulty a little higher. But, in the meantime, I want to try out my new base design on a few Horde Nights to test its construction. (Despite the fact I am only just completing it I have already spotted some things which need tweaking or improving.) 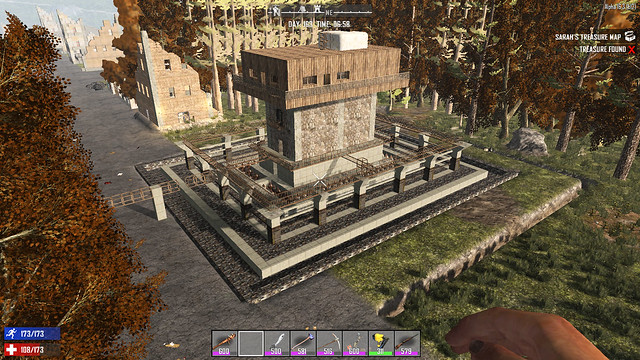 This build is taking me so long because I keep adding bits on. What started as an idea for a simple 'keep' has blossomed into a small castle!

I'm also venturing further and further afield in search of new cities to loot. This has made me realize just how big the map really is and I wish they allowed you to build a sort of 'Mad Max' style microlight aircraft...That would be cool.

Despite finding four cities now, I am still coming across new and interesting 'special' buildings. My latest raid to a far-flung location delivered a very nice surprise... 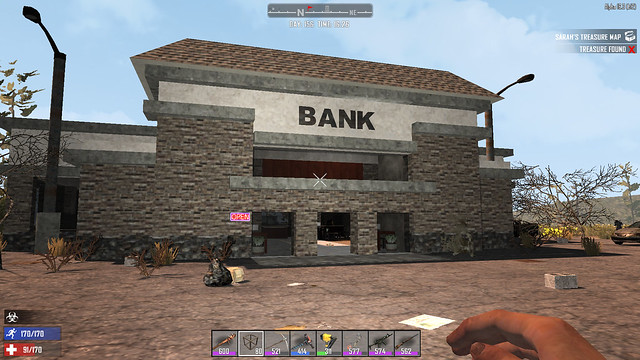 There was a very nice haul of loot in the bank, which made the long drive worthwhile (over 2 hours in-game time) but it still niggles me that I have not come across a single gun store yet!

Single-player Psychosis!
One aspect of these sort of large-scale RPG 'explore and loot' games is that when they are played single player they can be a little 'spooky' at times. I guess that actually lends to the sense of being a lone survivor in a post-apocalyptic world, but it can cause you to get a little jumpy sometimes.

Last night I got completely creeped out when I exploring a town and I found another minibike! It reminded me of the book 'Robinson Crusoe' when he discovered the footprints of another person on his beach...That feeling of not being alone was decidedly eeie!

It took me quite a few moments to eventually realise that my game had not been invaded by some interloper, but that I had abandoned this bike some time ago when I was killed when I first discovered this town!

...This is what happens when you play a game like this late at night on your own! :D

The End is Neigh!
As I said, I'm starting to get that feeling that I've broken the back of the game at this difficulty level now. Even Horde Nights are not that much of the challenge that they were. However, I'll continue a bit longer with this particular game as I still want to try out a few things, such as electrical items.
Posted by Beaty at 05:09 No comments: