...It's been a while since my last blog-post despite promising myself to post more regularly. However, in my defence, I didn't expect my free time to be completely hogged by a game which I think can be fairly described as clinically addictive! 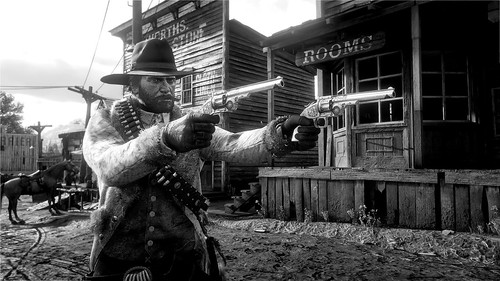 Red Dead Redemption 2 was the most anticipated game for PC in 2019, perhaps made even more desirable because - initially - it was only released on consoles. I was a relatively new convert to the Rockstar 'way' of making games - having just completed my first introduction to their 'Grand Theft Auto' series, GTA5 - and so I was completely on board with the idea of a Wild West 'version' of their seminal outlaw action-adventure format.

So, having finally* reached 50% (80 hours worth of play) through RDR2's story campaign, I feel I've enough gaming time under my belt to be able to give a fair overview of what entering Rockstar's 'West World' is like... 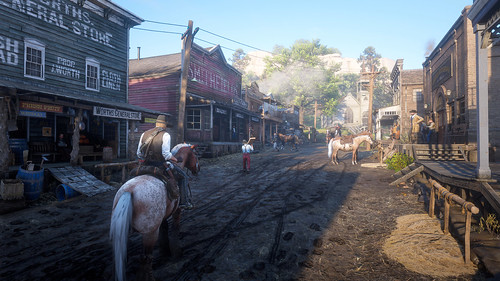 * I am not just sticking to the main story campaign, but rather I have been undertaking side missions, quests and achievements AND just doing a bit of wandering around. Hence why it's taking me a while just to get this far into the game.

They say size isn't everything (smirk), well we all know that isn't true! Rockstar has a reputation for creating amazingly detailed and massive game 'worlds' - GTA5's area blew me away with how enormous it seemed - but with Red Dead 2 they have surpassed themselves. 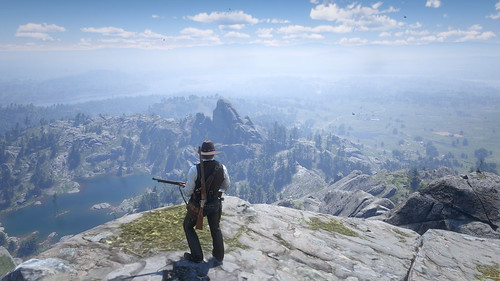 Now I cannot say that - mathematically - the RDR2 play area (chapters 1-4, that's as far as I have gotten) is bigger than that of GTA5, all I can say is that it gave me the impression that it was very much bigger. It may have something to do with the fact that your main mode of transport is a horse - though there are fast travel options - or it may be to do the lushly detailed Western environments, but whatever it is Rockstar make you believe you are in a vast American 'West' in the 1890s.


I say 'West' as a generic term to describe the geography of the 'Western' genre, but - in fact - Rockstar has squeezed several different biomes into their map which we broadly recognise as 'Western' environments, even if some of them aren't strictly speaking 'west'!

Here's my take on the RDR2's habitats, although all the game's regions are amalgams of, perhaps, two or three US states (Rockstar packed a lot in)...Again, this is just Chapters 1-4 (50%) of the story campaign (as far as I have got)! 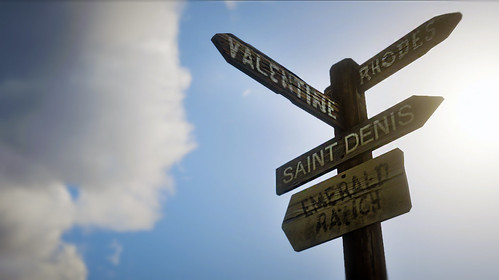 • AMBARINGO (north): References Wyoming and 'The Rockies' or even Southern Canada (in the extreme north-west of the map) and will put you in mind of movies like  Clint Eastwood's 'Pale Rider' [1985] or Tarantino's 'The Hateful Eight' [2015].

• WEST ELIZABETH (middle-west of map): Is reminiscent of Colorado and California, transitioning from the Wooded, rocky highlands in its north to the dry grassy plains in its south. Movies that put me in mind of these locations are either version of 'True Grit', the 1969 John Wayne classic or the very well crafted and very enjoyable 2010 version with Jeff Bridges. 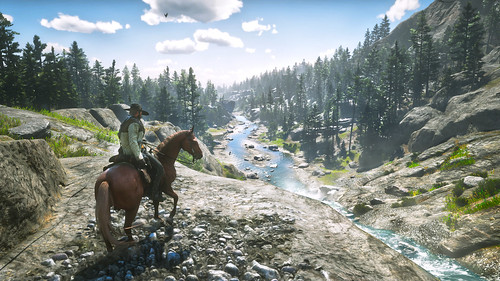 • LEMOYNE (south-east): 'The South', very little doubt about this although it does still combine various ideas of what 'the south' is, geographically and politically. Lemoyne incorporates what is referred to as the 'deep south', the cotton plantation area (Georgia, Alabama, South Carolina), to its west. In its northeastern third, it features the swamp infested Bayou with the mighty Kamasa River (Mississippi?) running south through it. And at the region's south-eastern tip is the glittering city of Saint Denis (New Orleans?), RDR2's largest municipal. I'm a bit hard-pushed to think of 'Westerns' that were set in 'The South' (outside of Civil War-themed movies), the best I can do is Tarantino's 'Django Unchained' [2012]. 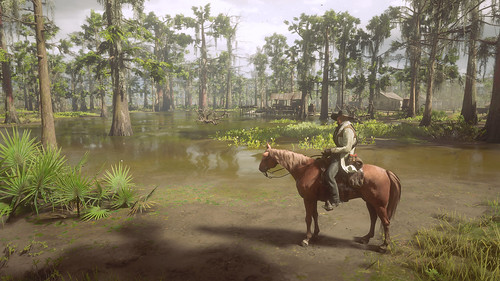 • NEW AUSTIN (south-western region): Although I haven't 'visited' this region yet (it seems to feature in the latter half of the game, which I haven't reached yet) from what I have seen and read - tangentially - New Austin seems to be intended to resemble New Mexico and Texas. So, think of Clint Eastwood's 'Pale Rider' [1985] or 'The Magnificent Seven'! (We are getting into Spaghetti Western country!)

Note: Unfortunately, I have only just reached the border of New Austin in the game. The picture below shows as far as I can travel at the moment as I am wanted 'Dead or Alive' over the border. You can just make out how New Austin is a drier territory than it's northern neighbours. I will be updating this post as I progress through the second half of the game.

And that's 'the world' of RDR2...At least, until Chapter 4 - I'll update this post once I complete the game with the additional locations...

BUT...HOW DO YOU GET THERE?

GTA5 was a game of automobiles and freeways - the clue is in the name - and although the map was big you didn't get the feeling that anything was too far away. With Red Dead 2, however, the horse is central to the gameplay. Your four-legged friend is not only a mode of travel it can also play a decisive role in how some of the adventures pan out! (I will say no more at this time, BUT unlike cars, horses have a mind of their own, be warned!) 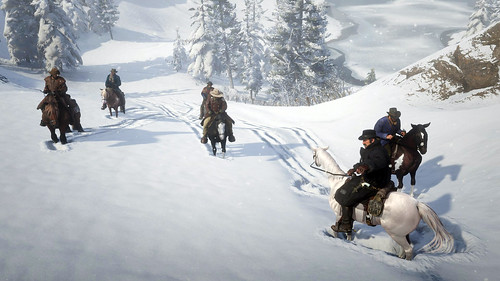 That said, galloping across the breadth of the RDR2 world can push the realism versus players patience dynamic to breaking point! There are times when it's nice to trot along admiring the beautiful scenery, but there are other times when you just want to get to the next mission or quest. Because of that, there is a fast travel option (in fact, there are three)...

Fast Travel Option No. 1 - The Campfire
Wait, what? A campfire is a fast travel option? OK, this sounds strange but think of it this way, Red Dead takes a lot of its cues from the Western movie genre and in a movie you don't see the cowboy travel all the way on a long journey, do you? No, you have a cut transition or maybe a montage to imply he has undertaken a long journey.

Imagine a Western without the transition, a classic movie like 'The Searchers' [1956, John Wayne] would be many days - if not weeks - long! No, we all accept the suspension of disbelief when it comes to the time in which it takes to travel in Wild West movies. And that's what the campfire is, its a cutscene... 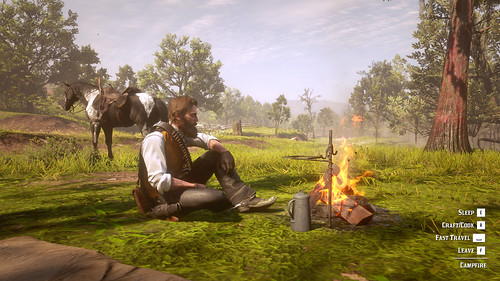 Fast Travel Option No. 2 - The Stagecoach
While the stagecoach is a more conceptually realistic mode of transportation - than the campfire's 'teleportation' - it still relies on the movie technique of implied passage of time via the use of the montage.

You board a coach - at one of the several stage stops dotted around the countryside - and after a few pictorial transitions hey, presto you are at your desired location! This service incurs a small charge...

Fast Travel Option No. 3 - The Train
Very much like the stage, train lines snake around the map and you can take a ride if you buy a ticket at one of the stations. It's worth noting that the campfire, stage and train do not all cover the same locations and, in fact, you can only fast travel to certain locations by means of a particular fast travel system. It would be worth mapping out which fast travel system goes where just so you know how to quickly and reliably get from A to B in Red Dead 2... 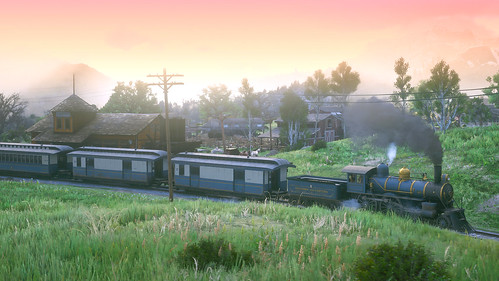 A point to note: In all these travel modes your horse travels with you! Yes, even if you take the stage or a train, when you arrive at your destination your trusty mount is there waiting for you. It's a bit of a fudge, but saves you from renting or buying a new horse every time you go on a long trip.

As I've mentioned (repeatedly, sorry) I'm just 50% through the game and about to start Chapter 4. So, how the game might expand 'the world' from here I'm unsure. But, I will update this post to reflect any additional geography that comes into play. I'm quite looking forward to New Austin.