Having now completed Red Dead Redemption 2 I can fill in the rest of my overview of the game world. This post pertains to the two epilogues when the 'exclusion zone' restricting your unhindered entry into the southern part of West Elizabeth (below Blackwater) and New Austin is lifted... 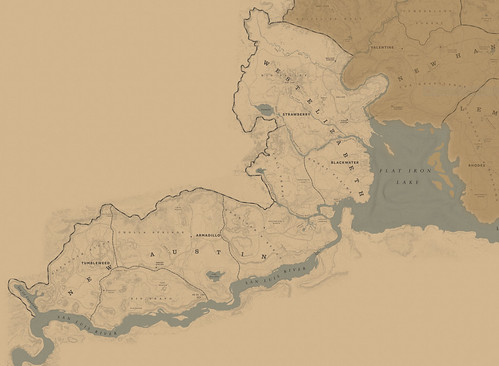 Up until the epilogue(s) the town of Blackwater is pretty much off-limits to you - as is the southern part of West Elizabeth (and as a consequence New Austin as well) - due to you being 'wanted dead or alive' in that territory. However, as the game resolves its story this area opens up and you are free to explore the map all the way down to the San Luis River, which marks the border with - a tantalizingly near but unreachable - Mexico.


Prior to the epilogue(s), I travelled as far as the very edges of the Blackwater exclusion zone, wandering down from the town of Strawberry to the Upper Montana River. Once you reach the epilogue you can cross the Upper Montana into the mid-western part of West Elizabeth which is characterised by the spooky Tall Tree forested area, home to the dreaded Skinner Brothers gang...

You can also - if you prefer - cross the Upper Montanna closer to Blackwater. The game's plot makes this bustling town central to the later part of the storyline and you will be undertaking the majority of the final missions from this key location...

From Blackwater - westwards - the grasslands of the Great Plains begin to turn into prarie as we make our journey to the last region in our story...

Crossing the Lower Montana River we see a marked change in the geography, climate and ecosystem, we are entering 'spaghetti western' country! Well, actually, it's the classic 'painted desert' country we see in Westerns shot in Arizona, beautiful red, mauve and pink sand and rock basins and escarpments. 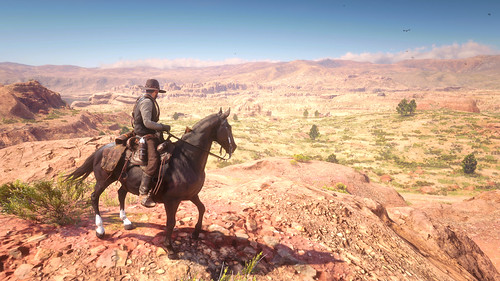 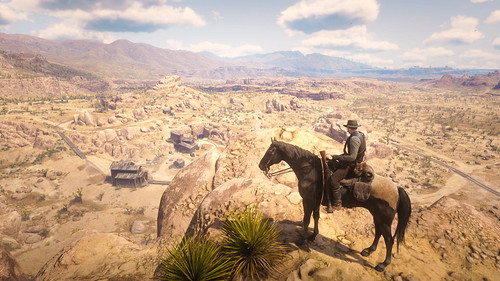 It's amazing to think that New Austin, a minor territory in Red Dead 2, is - essentially - the main play area of the original game! This is how much more Rockstar Games have squeezed into the second game. And yet, frustratingly, we cannot visit Mexico which was the other half of the RDR1 'world'.

We can just stare, longingly, across the San Luis River - Red Dead's equivalent of the Rio Grande - wishing Rockstar had just gone that extra mile (or so) and allowed us to visit what we can see in the distance...


There are just a few missions based in New Austin, mainly centred on the tiny hamlet of Tumbleweed. I would have preferred more, but the game had to end somewhere and - to be honest - even if Rockstar had stretched the game out with a few missions more  I would have still moaned when they were completed. I just didn't want the game to end!

It was probably fitting that Tumbleweed was - in effect - the end of the trail, cowboy... Ye-ha! 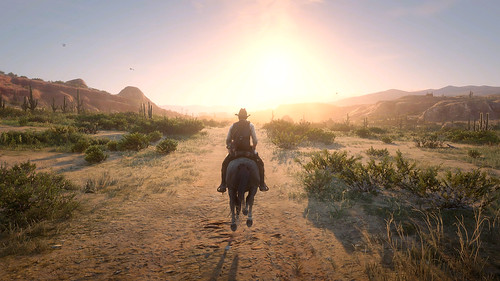