Into the Dark Zone! 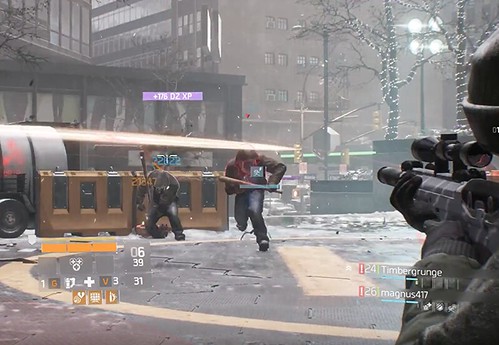 I was sort of forced into this. I was going to wait until I had completed the basic story mode before moving onto the more adversarial 'Dark Zone' - but I caved into peer pressure.

There is a lot written online about the merits (or otherwise) of The Division's Dark Zone, the sum of which has turned me off trying it out. So being dragging in was probably the best thing, in the end, otherwise, I might have put it off until I had tired of the game and never tried it. And this, as it turned out, would have been a real shame.

I'd allowed myself to be put off on the insistence of one of my gaming friends that the (quote) 'Darkzone is shite'! Which just goes to show you shouldn't always listen to your friends, because I really enjoyed my first DZ experience...

I was told after this first trip into the Zone that I had an easy session and that most trips are a lot more hairy. I hope that is the case because I'm ready for the challenge.

But at its heart, it's quite a cool idea and can be pretty exciting - although the caveat is that it may turn out to be a one trick pony. The fury of a hard gun fight against strong odds, then the nerve-wracking experience of getting to the pick-up zone and - finally - the heart pounding defensive stand to protect your haul (also, there is the little matter of getting back out of the zone alive).

I can see how this will be appealing, and a challenge, the first - maybe - dozen times, but after that?

One facet of this I haven't mentioned is the Rogues Agents. Other human players who inhabit the Zone and can be neutral, or a right pain in the bum!

We met two rogues on our trip, but they were the same level as my friends and didn't bother us. Had there been more of them, or they were of a higher level or there were less of us they could have made things very difficult for us. They could have could have 'mugged' us for our booty.

This potential intervention adds a bit of unpredictability, which raises the tension.
Posted by Beaty at 15:42 No comments:

Another long drought in postings brought on by another long drought of computer games. There have been a couple of games that fleetingly grabbed my interest - most notably Insurgency and Fallout 4 - but their attraction was short-lived, particularly as my game-playing friends never took to them.

However, and I have to say rather unexpectedly, I have been enthused by the recent release of Tom Clancy's The Division on the PC... 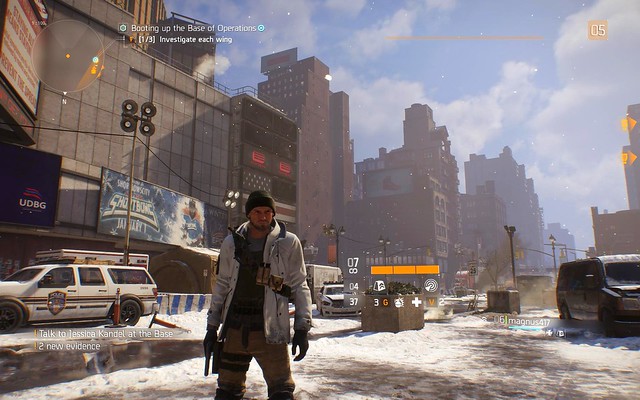 Shoot stuff and collect stuff, basically. But the game is worth mentioning for it's absolutely gorgeous environment. The gameplay maybe run of the mill - and there are questions about its longevity - but there can be no question about the fact that - graphically - Unisoft have raised the bar. It's really hard to imagine going back to Call of Duty or Battlefield gaming environments after playing The Division!

Trudging through the winter cityscape with its eye-popping level of detail is a sheer pleasure in itself, and in some ways the missions get to become something of a side-event as you tour their version of New York.

Of course, shooting stuff does still get the blood pumping at times - at least, until you realise that one encounter with the gangs of bad guys that roam the wrecked shambles of the city is very much like another. To distract you from this, there is a fair amount of searching and being rewarded upgrades, but over the course of time, you realise that the actual progression through these upgrades is somewhat limited in the advances they can actually deliver. They really only suffice in 'keeping you afloat' in terms up your levelling up. 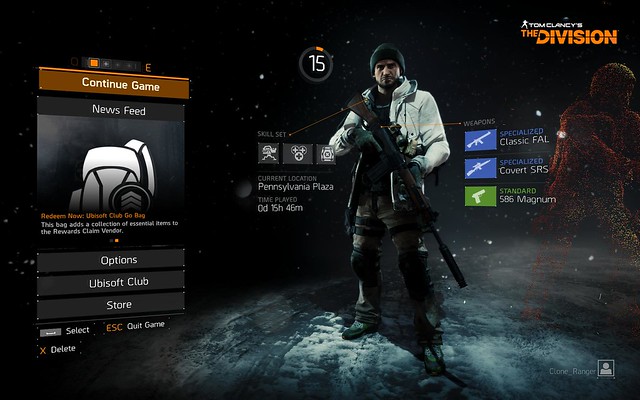 Don't get me wrong, this game isn't another cul-de-sac - as was Fallout 4 - but there is an ever growing fashion for 'crafting' among gamers (as a reason to collect 'stuff') that isn't quite satisfied in this game. Neither is the base development aspect much more than perfunctory - there is no base building here, as there was in Fallout 4.

Weapons and combat are 'OK'. Though I have yet to undertake the PvP component of the game by entering the much dreaded 'Dark Zone'! (The consensus among commentators is we wait until we hit level 30 before we venture into that zone and take on real human adversaries.) 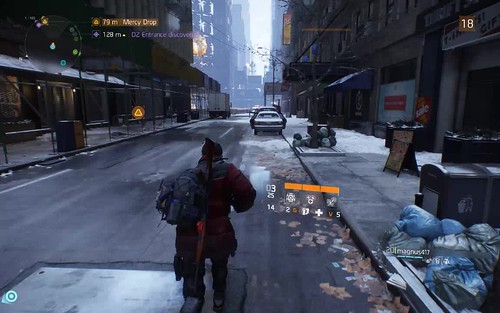 There are some really nice touches, like the 'civilian' survivors that are dotted about. Some games provide cityscapes that just feel totally empty - looking at you Battlefield 4 - but in The Division there are people about, many of them are just 'hiding' It's rather amusing - and quite immersive - when every so often an NPC opens the window of a first floor apartment to shout at you or - in one quite bizarre situation - started taking photos of me 'doing my thing'!

But interaction with the civvies is quite limited, which is a shame.

Well, that's my thoughts so far, but I'll end on a positive note, The Division has engaged my friends and I, to such an extent that we have been getting together online again after a long hiatus. So, for that, it has definitely been well worth the purchase.
Posted by Beaty at 02:10 No comments: