Well, not really done but, rather, I have completed the basic 'story mode' element of the game. This is the solo and co-op AI-adversarial part of the gameplay and lead you through a plot which uncovers the who and why of the bio-terrorist attack that is at the heart of this game.

Simply put (no spoilers here), the story mode is a sort of training event which leads you to what Ubisoft was perhaps hoping would be the icing on the cake of their blockbusting game - your Dark Zone incursion! The initial part of The Division has you - aside from investigating and revealing the plot - upgrading your weapons and abilities and honing your skills to a point where you can confidently cope with the challenges of the game's PvP arena.

To me, Ubisoft did not make the completion of the investigative part of the game as integral to game progression as it perhaps should have been. The fact that you can 'skip past' the whole plot-line if you want detracts from its relevancy and questions why you have a plot at all if it has no bearing on your progression to the finale. But, apparently, some players don't like stories and just want to shoot!

Anyway, by the time you reach level 30 you should be a fairly adept user of the game's mechanics and ready to face other players directly in the gladiatorial area of The Dark Zone. The flaw in this is that this zone is inhabited by some very (very) high-level players (who have no lives) and you will have your butt handed to you when you encounter them...A bit of a flaw i Ubisoft's plan!

Role on the DLC is what I (and many others) are saying.
Posted by Beaty at 02:08 No comments:

The Division - My impressions 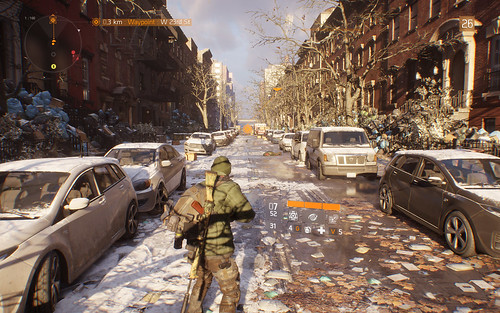 The past couple of years has been rather disappointing gaming years for my gaming mates and me. The major 'blockbuster' games failed to ignite our passion and our little friendly gaming clan has somewhat disintegrated as we all went our separate ways with a variety of single player games that piqued our individual interest (at one point I got heavily into Sniper Elite 3, which none of my friends showed any interest in)!

So I was taken a bit by surprise at the title that has gotten us back playing together, as it isn't our usual first person shooter, multiplayer online battlefield game. In actual fact, it's Unisoft's The Division.

First-person to third-person
I'm tempted to ask what happened to second-person, but I'll skip that! Since BIG clan - that small group of casual (more interested in drinking while playing) gamers got together we've always been interested in FPSs. From Battlefield to Call of Duty (when pushed) to Bad Company and Borderlands, we've always preferred our twitchy gun action 'in our face', so to speak.

I already mentioned Sniper Elite - which is third-person - and my failure to interest my friends in joining in the co-op goodness of this game, and yet, when I think about it, Sniper Elite 3 and The Division have certain things in common. Maybe it was the background story of The Division that enthused my mates and got them to overcome their aversion to playing a third-person view character?

New York, New York
I missed all the hype about The Division completely, that's how far out the loop I am with games these days. So when my clan-mate BIG-Magnus contacted me to tell me to 'buy it now' I was a bit non-plussed. A third-person co-op shooter based in a post-biological-disaster New York? That didn't sound like 'our sort of thing' (and bad memories of DICE's ill-fated Battlefield Hardline popped into my mind for some reason).

But I'm so glad I wasn't put off because The Division was no-where near the insipid and bland experience of Hardline. For a start, it's not a mass multiplayer online free-for-all - it's a group co-op (sort of) 'RPG', third-person shooter that also has a multiplayer PVP facet.

But what captures your attention most of all about this game is the absolutely stunning digital reconstruction of a post-apocalyptic New York. It's so immersive.

Now, I've just been playing Fallout 4, so I thought I knew what good post-apocalyptic Americana looked like. But, The Division makes Fallout 4's world look like a Disney cartoon!

The gameplay
OK, forget about the super enthusiastic hyperbole about how good a job Ubisoft has made of their New York - what's the game like?

It's OK. The storyline is fairly interesting and the associate 'plot' based co-op paperchase (masquerading as an RPG) can be challenging at certain times, but I found myself in the same 'shoot and loot' territory as Fallout 4, without some of the crafting incentives of that game (though there is a supplementary crafting element to The Division, it isn't as central to the game as it was in FO4).

There is a paper-thin attempt to get you involved in a building process, but it's a pretty linear pre-scripted event. As you progress in the game you collect items and credits which allow you to upgrade your main base. And as you 'turn back on' the city's utilities, security and medical facilities you - in turn - receive more perks and talents that help you with your combat.

But this is no Fallout 4 'base building'. You are restricted to pre-set elements which you can reactivate in your base, the only thing you can determine is what order you choose to turn things back on. And in the end, the overall effect is the same.

Shooting, weapons and adversaries are likewise so-so, but the missions are fun enough if you play with friends (the challenge increases with more players). Modification and types of weapons are a bit limited and there are no 'super-weapons' (forget any sort of alien plasma doomsday pistol), weapons are restricted to the limitations of real-world technology (sort of).

However, about level 18-20 (out of 30) you twig to the routine and that upgrading weapons and perks and what-not is just a means of cranking up the challenge of some very similar looking missions. It all feels like pre-level 30 is just 'training' for what Ubisoft hoped would be the main event as far as challenges is concerned - the Dark Zone.

In conclusion
The Division starts well, but ultimately cools down in the excitement it can illicit from the player. I think Ubisoft missed a trick when it didn't open up the chance for you to actually join one of the gangs as part of the storyline - in a similar way to how you can choose to join a faction in Fallout 4. This would have opened up the possibility of a variety of different endings to the game, thus making it a little less linear. Plus, let's face it, it's fun to be 'bad'!

No matter how complex the game, and the reconstruction of New York, all road lead, inextricably, to 'Rome' as it were.

I really hope Ubisoft rectify some of the sameyness of the missions in the forthcoming DLC, because if they do that they will have a classic game on their hands (at last). At any rate, The Division is a road sign which points to how games worlds can be...My friends and I spend a lot of time wondering what a Battlefield title would be like with the level of detail that there is in The Division.

As a solo game, you will not, I think, want to play this game through more than once. As I said, the fact that you can't play it through the first time a 'good guy' and then play it through again as a gang member or as one of the adversarial groups is a real faux-pas on Ubisoft's part. However, as a co-op game, it does offer you a lot of fun as your friends and yourself make it hard for each other to complete fairly straight forward missions!

But wait, there's more...
Now, the above is a sorta fair overview of the game - it's looks gorgeous, but it's flawed. But I don't want you going away thinking what's the attraction then?

I have thoroughly loved playing this game - because, to my mind, 'playing' the game means taking part in the paper-chase across and exploring (digitally at least) one of the world's great cities, New York. The shooting bit is a bit of a plus!

Believe it or not, I have enjoyed some of the touches which are little more than asides in the game. The giving out of supplies to the locals, being heckled at from windows by the Native New Yorkers! The only thing that is missing is the local food shops not being open and I would feel like I was on vacation in The Big Apple.

Now, I will stop at this point as all my commentary - thus far - has been based on my experience as a player pre-level 30 and pre-completion of the storyline part of the game. I did do a couple of Dark Zone incursions, but up until now I have been involved in The Divison as a game that, in many ways, feels like Borderlands (and, dare I say, even a bit like some of Left4Dead 2) in that I've been playing a co-op, story-led, shoot and loot action game.

By the time you reach level 30 (and perhaps even earlier if you are an avid fan of watching vlogs about the games you play and how to improve your play) The Division changes slightly. It becomes a bit more serious - if the whole story about biological armageddon wasn't serious enough for you - and you really start to begin to hone your skills in preparation for serious Dark Zone PVP battles.

So, more about that later.