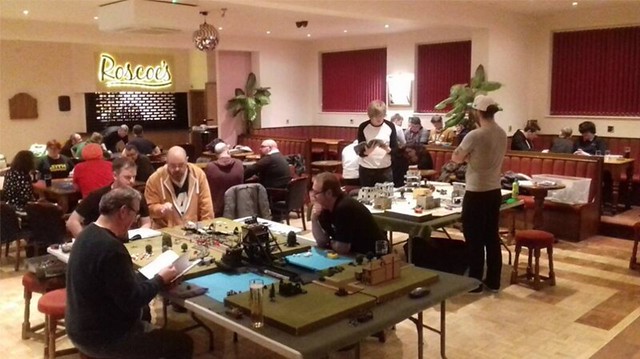 Last night, I attended a session of the Scarborough Game Society and was lucky enough to be invited to join an amazing 'Bolt Action' skirmish based on the events which took place at Pegasus Bridge in 1944. 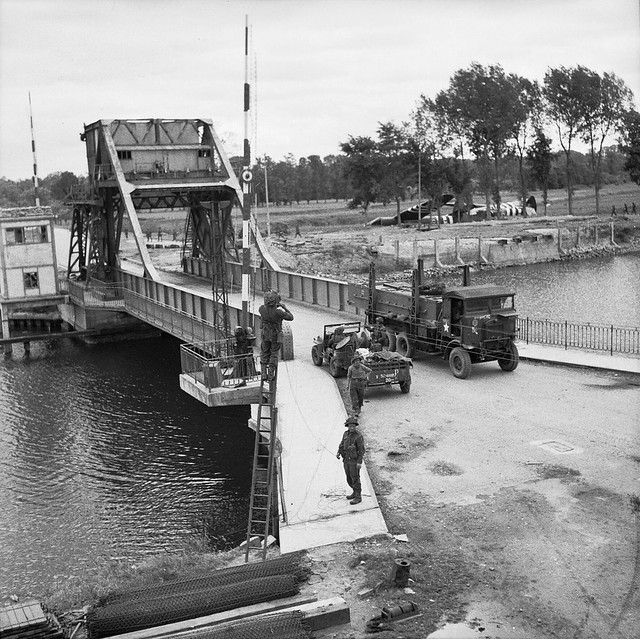 "...a major objective of the British airborne troops during Operation Deadstick, part of Operation Tonga in the opening minutes of the Allied invasion of Normandy on 6 June 1944 during the Second World War. A unit of Glider infantry of the 2nd Battalion, the Oxfordshire and Buckinghamshire Light Infantry, British 6th Airborne Division, commanded by Major John Howard, was to land, take the bridges intact and hold them until relieved. The successful taking of the bridges played an important role in limiting the effectiveness of a German counter-attack in the days and weeks following the Normandy invasion." Source: Wikipedia

I was assigned to the British side and together with my team-mate, we were to assault the bridge defences and try and take control of the bridge itself. However, before that could begin, there was the little matter of landing our gliders and deploying our units from them... 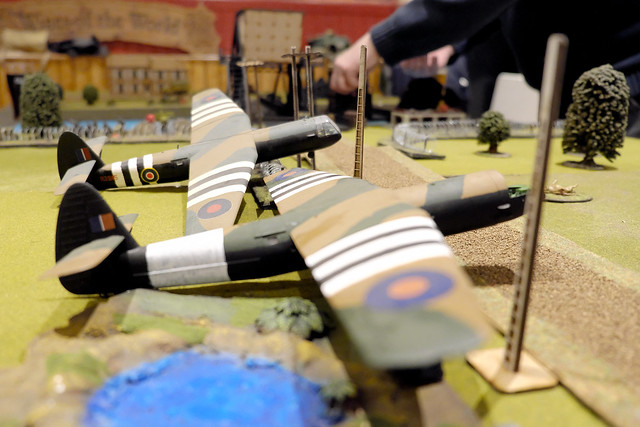 This we managed to accomplish, and with the German defenders taken completely by surprise I tried to rush the Paras into action as soon as possible to take advantage of the enemy's confusion (to simulate surprise the German side starts the game with all it's units 'pinned').


The Plan: My plan, such as it was, was to try and rush an enemy anti-tank emplacement on my side of the canal, adjacent to the bridge itself. I would use this as a defensive jumping-off point from which I could assault the bridge itself AND also - by capturing the AT gun - defend against any armoured reinforcements trying to get over the bridge.


However, what is it they say about plans not surviving first contact with the enemy? Right away, things started going wrong for the Paras. There were two problems, first of which was that the approach to the bridge was a narrow bottleneck of a road (with barbed wire on either side) and also, the game's Action Dice were not in our favour!

To begin with, the enemy team's luck was annoyingly good...Very good. They picked out their Action Dice from the bag repeatedly and consistently for the first half of the turn. The Paras didn't even get more than three units out of the gliders before the Germans started throwing fire our way...


Not only did the Germans have the dice god smiling on them, but their positions were quite formidable. The bridge on our side featured the A-T pit, the bridge-house with an MG mounted on the roof, a section of troops and an MG armed jeep guarding the bridge and a blockhouse with a section of infantry in it... 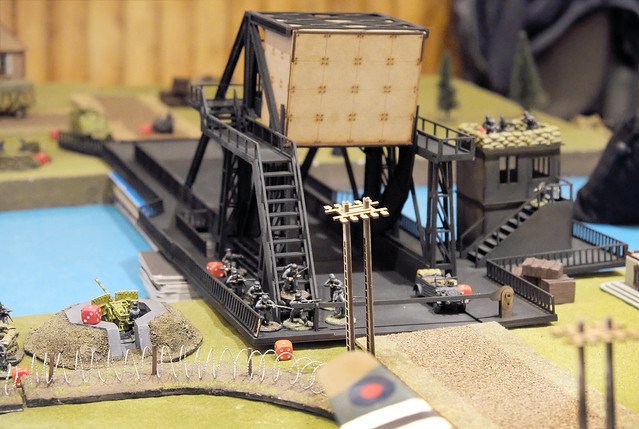 My plan looked to be in tatters - as I just could not seem to deploy from the gliders quick enough - I took the suggestion of my more experienced teammate and started to move the rest of my units into nearby cover. At best, all I could seem to do was keep the Germans ducking for cover.


Things were starting to look very glum as we ended the first turn, not helped by some dreadful dice rolls on my part (my poor partner remained stoic, but inside must have been spitting feathers at my lack-luster '2s' and '3s' when I needed a good hit. BUT THEN...

Finally, a bit of good fortune. I managed to move my PIAT A-T team into a close enough position to take a shot at the German's MG brandishing Kubelwagen jeep, which was blocking our advance up the main road to the bridge...


This was swiftly followed by some good artillery support for The Paras, which helped to thin out some of the German infantry guarding the bridge.

Halfway through the game, and things are starting to look a little less of a disaster (thank goodness, I was dreading my maiden game would be a rout) and with LOTS of advice from my teammate, I tried again to move our infantry forward down the approach road...Under a hail of bullets.


Still pursuing my erstwhile idea of taking the German A-T emplacement (on the bridge's left), we made use of our flamethrower and incinerated the infantry which was keeping us back on that side of the table. Their grisly work done, the Para's flame-team went down to heavy MG fire from the bridge house roof (on the right)...But their sacrifice had given us some hope.

The lead Paras now started to storm forward, lead by the redoubtable Major Howard - this despite the fact that our supporting fire remained pathetically impotent because of my poor dice rolls - and it looked like we might just make it to our goal...BUT THEN... 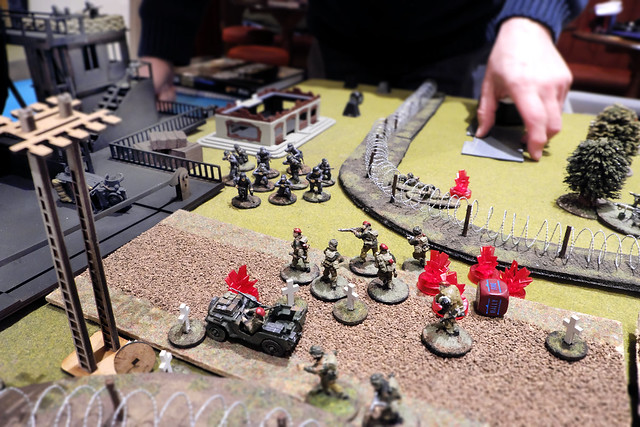 The Germans - spotting our slight advantage - emptied their block house of its troops and made a mad-dash charge against the Para's spearhead unit... 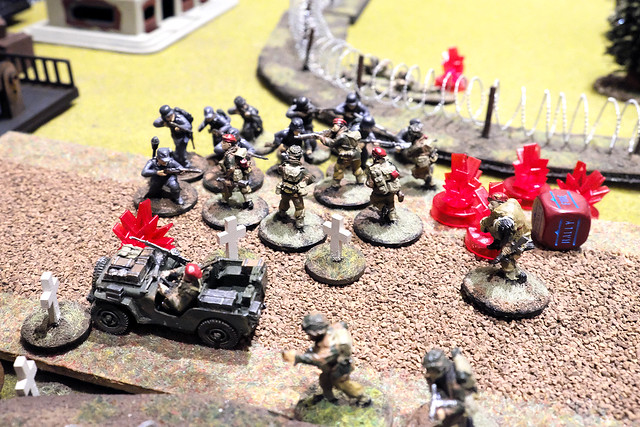 Brutal close-quarters combat ensued and for a moment things hung in the balance. But this piece of desperation on the part of the Germans was doomed to fail, as the elite Paras finally overwhelmed the German conscripts (but not without suffering heavy losses).

The writing was on the wall now, but not without some controversy as a debate broke out on the interpretation of the rules governing the effectiveness of the German's armoured Hanomag Sd.Kfz. 251, which still could have caused the Para's advance to falter. At this point, as a complete novice, I had to leave the more experienced players to flog out the meaning of the Bolt Action rules, but the upshot of it was that the armoured vehicle had to retreat back off the bridge...This was a crucial event.

With the half-track reversing, post-haste, back along the bridge, there was little to stop the Paras from reaching the bridge itself - the winning condition of the game - and it was Major Howard himself that led the charge forward...


Victory to the British and debrief:
I hope you enjoyed this recount of the battle for Pegasus Bridge as much as I enjoyed participating in it. Although, I have to say my actual effectiveness is debatable, and I really have to thank my partner, Craig, for putting up with my simplistic novice tactics and my horrendous dice-throwing! To be honest, it was Craig's gentle advice in the later game (when it perhaps became obvious that I was leading us to disaster) that turned our fortunes.


That said, it was a brilliant night and a marvellous initiation to a complex set-piece Bolt Action senario. And I have to thank the members of the Scarborough Games Society for being so patient with a complete 'noob' like myself.

In the end, the game took us over five turns to complete (roughly four hours of playing). But, it speaks volumes that, for me at least, the time flew. Actually, the game needn't have ended there as a second phase could have been fought as the Germans brought in reinforcements to counter-attack and it would have been nice to have seen if Major Howard could have held on to his prize from his perch on the gantry of the bridge!


I'd like to thank our very sporting 'enemy', as they had to put up with my very ponderous decision-making process and I suspect went a little easy on me as this was my first game with them. I am very sure, however, that they will be seeking revenge and next time will not be so flexible in their gaming.

And, finally, much kudos and appreciation goes to Craig, whose miniatures and gaming pieces - including the amazing Pegasus Bridge model - we were using on the night. I hope my involvement was too frustrating! 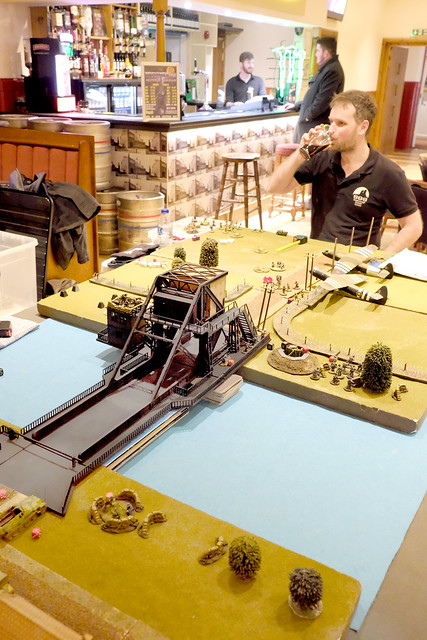 The Scarborough Games Society meeting each Monday and Thursday at the Rosco Rooms, Scarborough from 6 to 9(ish)pm - though we were still playing well after that! And you should note that they play all sorts of board and tabletop games, not just war games.

You can contact them or check out what sort of things that they do play over on their Facebook page:
Scarborough Games Society @scarboroughgames
Posted by Beaty at 03:31 No comments: 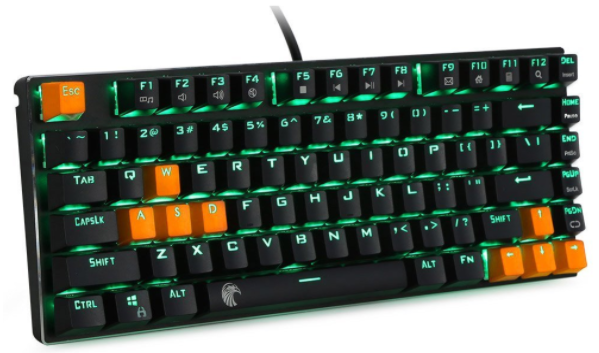 Yep, bust another keyboard! Not another rage casualty - LOL - but a simple failure of components. Some of the backlit keys on my old keyboard just gave up the ghost, which was a bit annoying as I like to play games with the light out so I depend on the illuminated keys.

Anyway, had a good search around and managed to find a reasonably priced keyboard (for a mechanical gaming board that is). Some of the gaming keyboards are getting stupidly expensive these days, the board of choice for my friends is the Corsair STRAFE Mechanical Gaming Keyboard which comes in about £97.

By contrast, I picked up the Koolertron Compact RGB Mechanical Keyboard for just £47.99. 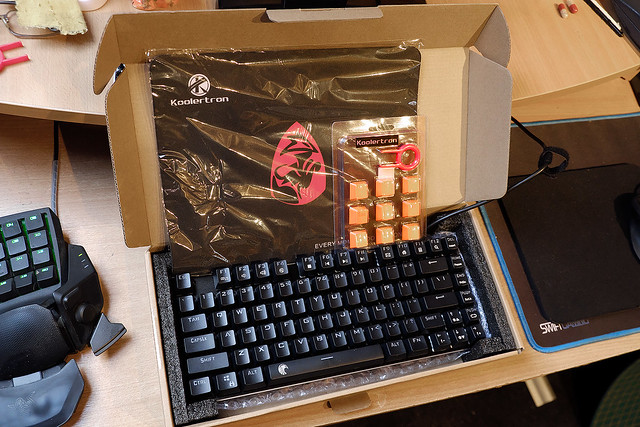 The keyboard comes with a complimentary mouse pad and set of alternative high-viz keys for you WASD, Escape and arrow keys (plus a neat little tool for removing keys)... 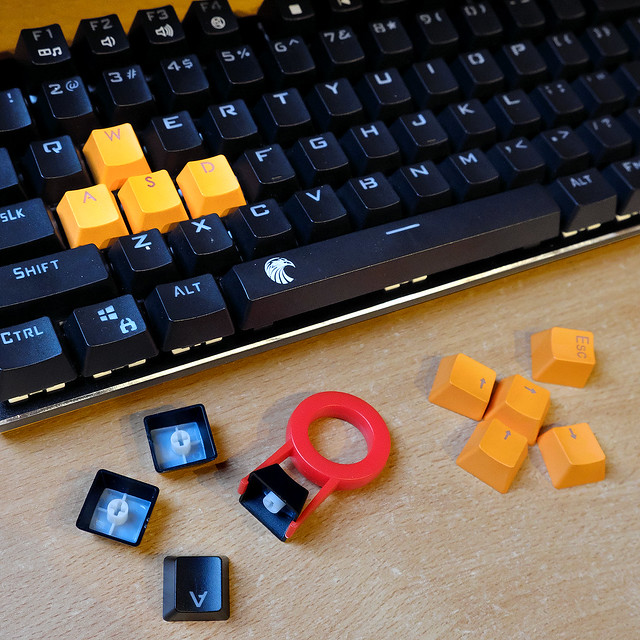 As I said, I like to play in low light, so the actual usefulness of high-viz keys is somewhat negated. But, they are quite attractive so I installed them anyway.

What is very useful, and central to my purchase of this particular keyboard is the RGB backlighting features of the Koolertron. You have the choice 10 different kinds of LED effects and colours, great for me as I can coordinate the colour of my keyboard with that of my Raser Orb Weaver Game Controller (green)... 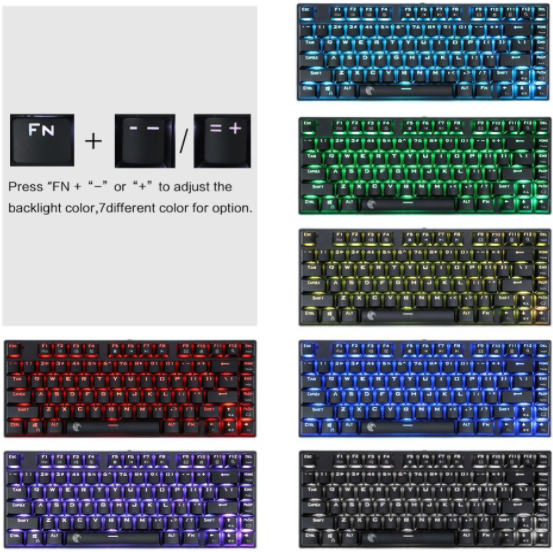 The other main feature of this board is its mechanical keys and, in this case, the keys are Blue Mechanical Keys. These are very 'clicky', far more so that Cherry Red or Brown mechanical keys. They may not be to everyone's' taste are they are quite loud and the current gaming trend seems to be moving towards 'silent' mechanical keys, for Lan party events (where a lot of noisy clicky keyboards might be distracting)... 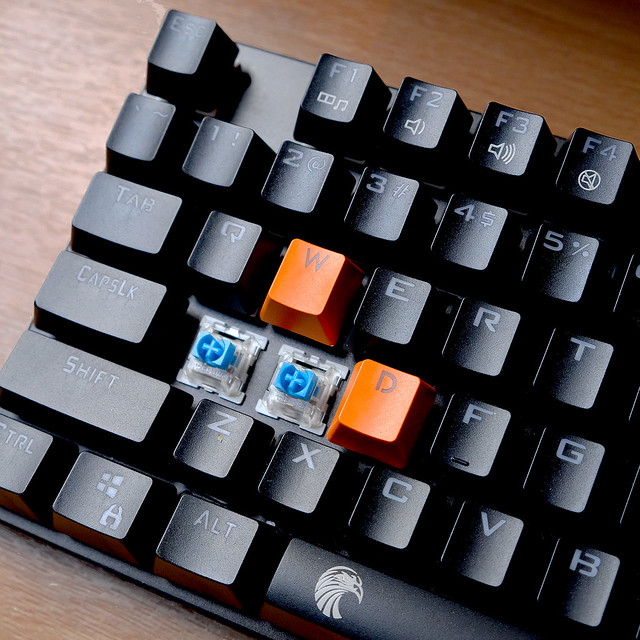 Finally, this is a compact keyboard. It foregoes the numerical keypad making it ideal if - like me - you are hard pressed for desk space. As I use the Orb Weaver as my primary key controller, I do not need a full sized keyboard as I only occasionally need access to a full QWERTY set (for surfing the web, etc).

I far prefer the reduced amount of space between my Orb Weaver (and my left hand) and my mouse (in my right hand). However, when I have to use the keyboard I find the blue mechanical keys very pleasant to use.

Altogether, I am very pleased with this purchase, it complements my gaming controller set-up very well. The backlighting, in particular, is exceptionally well done - not too bright - and allows me quick access to any extra keys or the function keys should I need them. I highly recommend this keyboard. 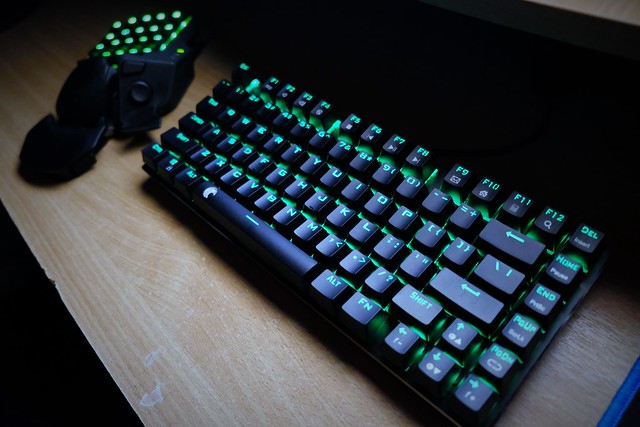 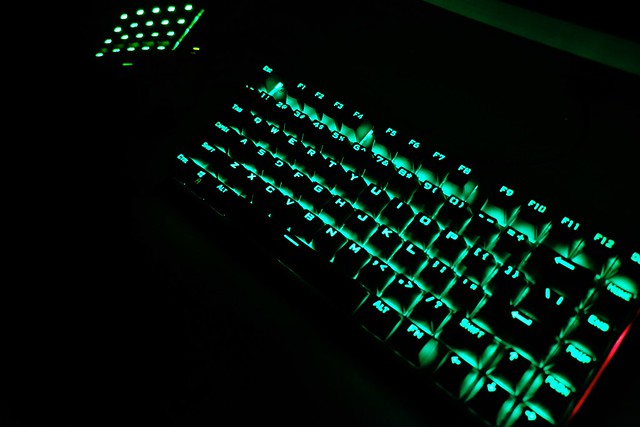