Maybe it's my age, but airsoft and computer games just don't seem to hold the interest for me they once did. What's really been holding my attention over the past couple of years has been good old fashioned 'analogue' hobbies.

It could be a retro thing or a case of nostalgia for my boyhood, but in any case I have been decreasingly interested in new fangled leisure pursuits and getting 'back to my roots' with plastic model making and playing traditional board games.

From a Milgeek point of view I don't really cover my model-making hobby all that much here - except for maybe the occasional finished model - as I have a blog specifically for that. But I'm starting to think that I should cover my board game hobby on this blog as it seems to me that there has been something of a general resurgence in the popularity of getting together with friends and family and rolling dice...It' not half as 'nerdy' a pursuit as it once was.

Game-wise I do tend to like the horror/sci-fi end of the game market and that's fine as I have always made room for Zombie related articles on Milgeek. It just means that I will expanding that theme a little more to include other monsters! 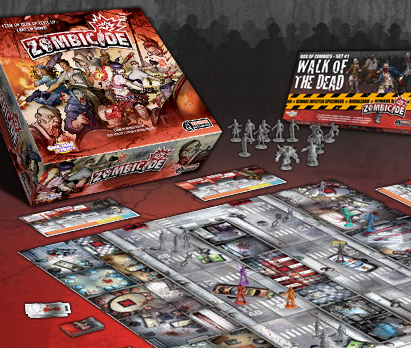 Zombiecide! A terrific co-operative survival game which is
reminiscent of the computer game 'Left4Dead' (a favourite of mine).


Interestingly there are actually a couple of clubs in my hometown who play tabletop games, one specifically a war-game club (which dabbles in the occasional fantasy/RPG game) and the other a fantasy/RPG club (that dabbles with the occasional war game)! But before you think that I am in danger of donning a cloak and funny hat and developing an interest in D&D, I should say that being involved in clubs like these are a great way to soften the sometimes steep learning curve associated with some of the more advanced tabletop games.

I hate reading 'how to play' instructions - I usually turn to YouTube if the game looks complex - but sometimes you really do need someone with experience to sit down and run through the basic play with you. So I may end up popping in to the local clubs on game nights that include games I am interested in learning.

On the wish-list is 'King of Tokyo' - which is defiantly not one of the more complex
table top games, as demonstrated by Will Wheaton & friends on 'Tabletop'.

So, there you go. Milgeek is going more analogue. But - to be honest - I have found that looking at the plethora of novel themes and ideas that tabletop game developers embrace they are apt to be a lot more innovative and take a lot more risks on what might be fun than their digital counterpart (who, like Hollywood, only seem to want to re-hash the same old ideas).
Posted by Beaty at 02:14 No comments: