The Division - My role 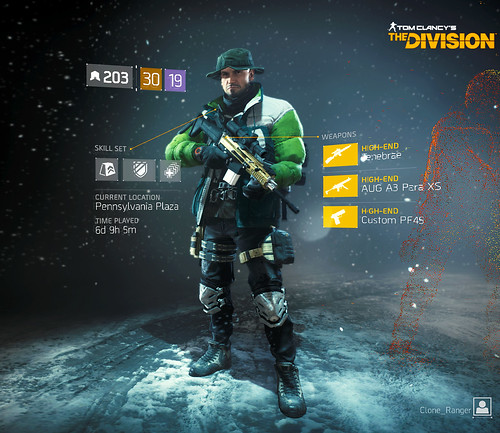 My role in the game is primarily dictated by my preference to play as part of my friends' team.  To be honest, I'm not a role/loadout nerd so concentrate on getting my team role and it's loadout organised and just run with that when I'm doing solo. Basically, I'm a bit lazy.

Broadly speaking, I am a marksman. I like playing a support role in my team, giving covering fire from the back and overwatching my fellows then jumping in close when they need some medi help. For close-up occasions I am currently running the AUG Para SMG, for close protection or when I am in danger of being over-run.

Support  Marksman
Unlike a sniper, I like the ability to be closer to my teammates (literally, just behind their backs) and I have picked an accurized assault rifle so I can 'mix it' when needs be. My teammates are quite aggressive players, so this means I can't afford to get too detached from the group and have to be ready to jump in if I have to medi or revive. 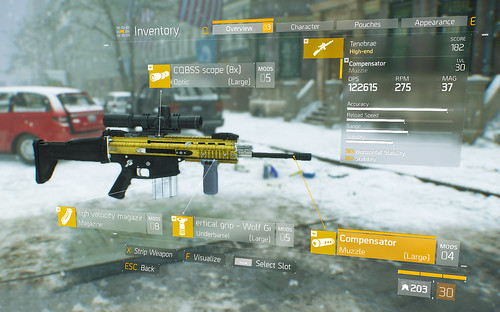 For this reason, I have settled on the High-End Tenebrae - which, in reality, is just a fancy SCAR 'H' - which I crafted from blueprints that are available from the vendor back at the Post Office base. The Tenebrae suits my preference for the FAL type rifle, as the SCAR 'H' (H is for 'Heavy') is the spiritual offspring of FN's FAL (The SCAR rifle also being manufactured by FN). In the real world both the FN FAL and the FN SCAR H are chambered for the 7.62 x 51mm NATO round.

My Tenabrae Set-Up
Being a marksman rifle I think stability, accuracy and damage are pretty important, but being able to critical hit is also a very potent facet of a set-up for this type of rifle. So my gun mode collection is currently as thus...

Scope - CQBSS scope (8x), Headshot Damage: 19.50% ~ Accuracy: 21%
- The CQBSS scope is - in my opinion - a great hybrid marksman scope. Some try to stick a high-zoom telescopic sight on their marksman rifle (indeed, the Tenebrae comes with a 12x zoom scope by default) but as I work closer in I like a lower zoom and a more open reticle.

Magazine - High Velocity: 7.59% Critical Hit ~ Magazine Size: 87%
- By default, the Tenabrae comes with a 20 round mag and if you use the rifle as I do, as a part-time assault rifle, you will soon find this very limiting. Getting your mag size up should be a priority, with critical hit as another high priority.

Vertical Grip - Initial Bullet Stability: 37.50% ~ Accuracy: 20%
- Stability in a high-recoil rifle like the SCAR H is important, without it your gun will be jumping all over the place as you maintain a steady follow-up shot stream. A bit of accuracy never goes amiss either, so keep crafting your favoured grip for better stats!

Compensator - Horizontal Stability: 36% ~ Stability: 36%
- Stability again! I haven't bothered with a suppressor (however cool it looks on a marksman rifle). This gun is loud and proud!

So, as you see I have concentrated on stability to offset the recoil of this heavy gun, plus some damage/critical and finally, I have added a bit of an extended magazine (this really makes a difference if you want to use your marksman rifle as a semi-assault rifle as the basic mag only holds 20 rounds).

But, I am constantly trying to refine these mods by re-crafting to see if I can improve the stats on them. For example, I am re-rolling my magazine frequently to try and up the size of teh mag closer to 100% and also to see if I can get the critical hit up. 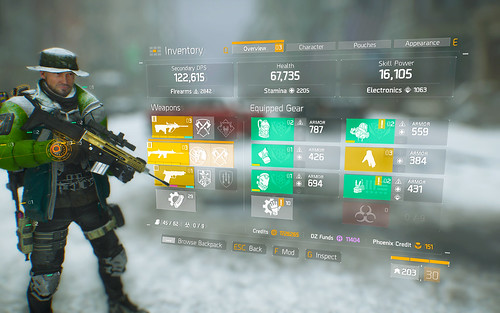