Sunday morning seems the ideal time to try out a game of Random Solo Adventure Fantasy Dungeon. It's nice and quiet and there's not a lot of jobs to be done, I can relax and concentrate on the rules and work out my first solo RPG uninterrupted... 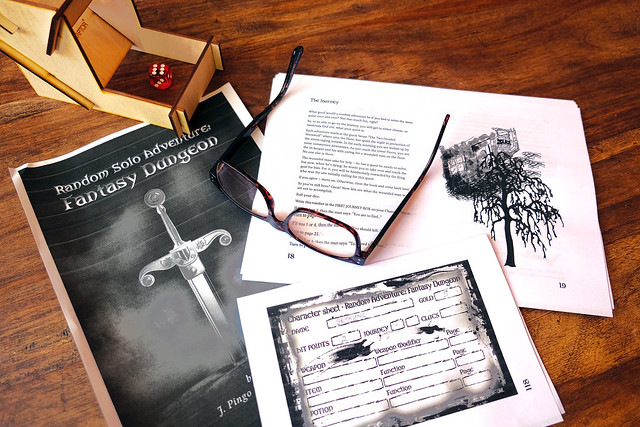 As I mentioned in my previous post, RSA is a small step up from the classic Fighting Fantasy books as it allows a modicum of the traditional dice and character generation characteristic of more advances RPG games, like D&D. But it's all geared for simplicity and the absence of a 'dungeon master' controlling the narrative.

In effect, the book is a 'dumb DM' which outlines the story, while giving a set number of choices in order to resolve events, these choices are resolved by the familiar FF 'If choice 'A', then go to page 'X' formula.

Still, the addition of character attributes and dice rolling to resolve combat give you a slight sense of full-blown RPG.

"In the early morning you are woken up by some commotion downstairs. As you reach the lower floors, you see the in-keeper [spelling!] and his wife caring for a wounded man on the floor."


And so as the story unfolds we come to our first set of 'decisions' about what to do next (determined by a dice roll)... 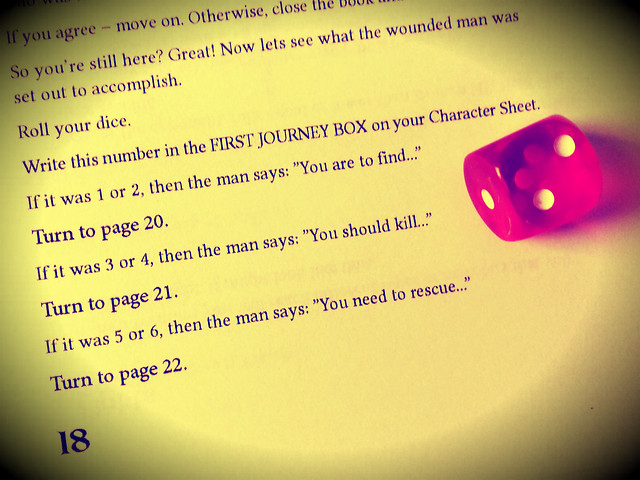 Well, let's see how I progress with my very first role playing adventure. No, it's not D&D, the depth of the system just isn't up to that standard, but it's a nice introduction for a RPG-noob like myself!

Yes, it's been a long while, but it's been a funny year. Basically, I have drifted in and out of ill health and been variously enthused for hobby stuff for a short spurt before dropping back into the doldrums. There have been periods when I have done little more than watch TV and my man cave (come games room) has fallen into disuse.

Maybe it's the sunny weather but recently I've started getting a bit more energetic and motivated and have started returning to some of my old hobbies.


So...What have I been up to game wise recently?
I've always been 'D&D-curious', but my sheepishness has always stopped me jumping onboard. I did try recently to join a local D&D group, but found the experience hugely intimidating. It's not that the group weren't friendly to newcomers, it's just that you could tell they had been gaming together for a long time (with very developed characters) and so it was a very scary prospect to try and break into this.


What to do then? Well, I decided to look about at what solo options there were for RPGing, thinking that this might get my foot in the door and build up my confidence. Surprisingly, my problem with breaking into group D&D seems to affect quite a lot of would be RPGers as there is quite a lot written on the subject a many YouTube videos giving numerous gaming options for lone players.

Starting Out n My Adventure...
Where to begin when you are a beginner, that's the question! Well, I watched several YouTube videos about where to start with solo RPG adventures and I eventually decided to start at the beginning. Yes, that is as obvious as it sounds, but there's absolutely no use trying to start with some of the solo modifications of regular RPGs (for example, there are ways to fudge normal D&D so you can play it solo) as these actually - on occasion - actually make the games more complicated to play!

The beginning, as it happens, is probably already familiar to us but we just didn't think of it...Fighting Fantasy books. Remember those from school? You started reading the adventure at the beginning of the book then you chose different outcomes or actions for your character by opting to 'go to page x' to resolve the consequences of your chosen action.

This is perhaps the most simple and most restricting and linear form of RPGing. The books had minimal 'replay factor' and were very linear and scripted (naturally) and this doesn't interest me now as I want something as simple to get into but which introduces me to some of the features of more advanced RPG games.

After a bit of an online search I think I found what I was looking for in Random Solo Adventures. Again, these are book based but add some basic mechanics like character creation, character stats and attributes, weapon attributes and dice rolling. I found these on DrivethruRPG.com.

There are several' 'books' (which are available cheaply as downloadable PDF documents) covering various fantasy and sci-fi sub-genres, so I started out with a classic dungeon quest and also a more Milgeek-like post-apocalyptic narrative...


I'm having a go at these this week with a plan to slowly introduce myself to more complex solo adventuring systems eventually. One thing I have my eye on is a relatively new system especially designed for solo play called 'Journey to the Overland'. This is more of your traditional heroic-fantasy dungeon quest type of RPG, but has a game mechanic more akin to things like D&D than the simple books that I am starting with...


So, there we go. I'm dipping my toe into the water with RPG (that's not computer based). This should be interesting and I hope that I will start posting regularly again here and that I will start with a review of the Random Solo Adventures that I'll be playing. :)
Posted by Beaty at 06:46 No comments: