You can't be a military movies fan and not have seen the classic 1968 WW2 adventure 'Where Eagles Dare', aside from it being a much admired war story written by Alistair MacLean it also has the less admirable reputation as being somewhat 'fanciful' (to put it kindly)! 😏

Over the years this movie has racked up a sort of cult-like urban mythology surrounding some of it scenes where credibility is stretched to the upmost limits. That said, as long as you watch this movie in 'the right spirit' - understanding that it is in the same story-telling ilk as James Bond ('men's adventure') - then you can relax and simply enjoy some of the more ludicrous moments and chuckle. Moments like the now infamous 'Nazi Death Count' videos... 😆

Now, I'm not going to run through all of the movie's congruities but rather I will focus on one well-know 'blooper' that is obvious to anyone with even a passing interest in historic military machines. Can you spot what is out of place in this scene, bearing in mind that this is set in the Bavarian alps of 1943... 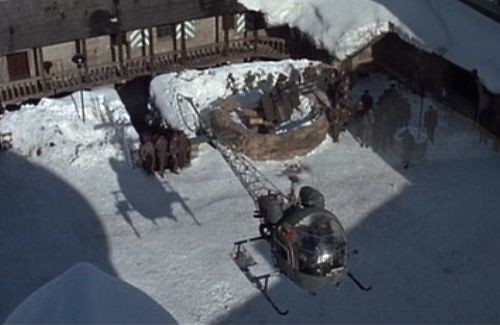 Now, the less informed will immediately jump to the conclusion that this scene is wrong because it shows a helicopter in a Second World War movie, but that's not the issue. In fact, as many of you will know helicopters were actually first used in WW2, by both the Germans and the Americans, and that the Germans were - yet again - leaders in this new fangled technology.

So, what's the gripe? Well, obviously the helicopter used in the scene was American Bell Model 47, which did not see use until 1946. However, given that original German WW2 vintage helicopters no longer exist in an operational state the substitution of an early helicopter of nearly the correct period seems forgivable (particularly as CGI was not even invented when the movie was shot).

It's a funny case where 'movie buffs' rightly point out an error, but at the same time they are most likely pointing out an error for the wrong reasons! (In that they erroneously believe that helicopters were not a 'thing' in 1943!)

Here's a video that explains what probably should have been in the scene instead, had one been available that is! ------->

I myself was unaware of this fact for many years and admit the idea of a helicopter in the movie jarred with me. It took many years before I was enlightened on the subject and I could then watch 'Where Eagles Dare' without having a good rant about the Bell's inclusion! 😆

HOWEVER... This still left plenty of other blunders that I could take pleasure in and it's - in part - these well known goofs that help make the movie so enjoyable. It's like we are all privy to a inside joke which is enjoyed by a community of like-minded war-movie enthusiasts. Incidentally, Where Eagles Dare is still  one of the top rated war-movies and is Stephen Spielberg's favourite war adventure (understandable when you consider some of the cavalier moments in the first Indiana Jones movie ... Remember that super advanced Nazi bomber that Indi had his fist fight with the Goliath German soldier?)!

OK, my lack of posts is NOT all my fault. My wife and I are both key workers and this whole pandemic thing has been a bit stressful (she's a teacher and I work as a Theater Domestic in the local hospital). So, for once, I have a reasonable excuse for neglecting my blog. 😇

So, I guess I better tell you what's been going on - well, it's been work, sleep, work, sleep, work, sleep! I never thought I'd be in what you might call an 'enviable job', but as lowly as my position is in the NHS I am at least working. Sadly, others have not been and my heart goes out to those who have either lost their jobs due to the lock-down or are struggling to make ends meet.

Anyway, back to Milgeek related things. I have had time to get some hobbying down, in the main I have been doing a lot of toys soldier modelling - the results of which you can read about over on my Molatero blog - and a bit of computer gaming. The gaming has been just fun and relaxing stuff which I have been playing with my youngest daughter - Stacey - and hasn't been anything that has required too my concentration.

We've been meeting online on a regular basis to have what I have dubbed 'Dad'n'Daughter' game nights and it has really helped me let off some steam throughout this difficult summer. Games included the classic survival co-op game 'Left4Dead2' and we've more recently been caining 'Borderlands 3'! And there have certainly been plenty of moments which kept us laughing...

Later on this month we are hoping my eldest daughter - Kayleigh - will be joining us online as we as we have another go at the recently updated 'Dead By Daylight' (another survival co-op game where your team has to survive being hunted by a psycopathic serial killer or monster)! Here's a clip from one of our 'family games' recorded back in 2017...😆

We might be able to field a full 'family team' of four this time as the developers recently added cross-platform play which means Stacey's boyfriend can join us via his Xbox! 😊

So, that's my life at the moment, long bouts of routine interspersed by some model making and computer gaming to relief the stress! I'm going to regularly schedule Milgeek posting - at least bi-weekly - from now on just so I can persuade myself that I do do interesting stuff in my spare time and I'm not just working and sleeping all the time! LOL

I'll leave you with this clip from lat night's 'Dad'n'Daughter' session where Stacey and I took on the Pain & Terror level boss in Borderlands 3. It was a doozy! 😅

...Oh, and the moral of the day is: The family that slays together stays together!